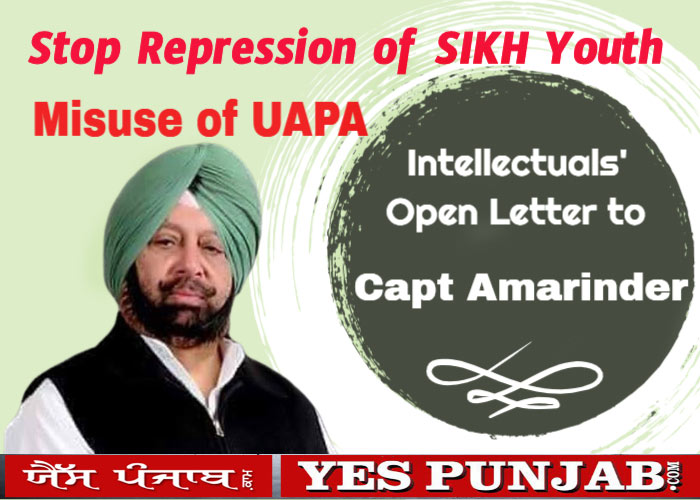 Chandigarh, July 2, 2020 (Yes Punjab News)
Some noted Sikh intellectuals and activists have shot off an Open Letter to Punjab Chief Minister Capt Amarinder Singh expressing their concern over the ‘recent spate of repression let loose by the state government’ and the misuse of UAPA to suppress Sikh youth.

The honorable Chief Minister July 02, 2020 of the Punjab, Chandigarh

In the last days of June 2020, our igneous Intelligence Agencies have ‘unearthed one terror module after another, supported by ISI of Pakistan and the Sikhs For Justice.’ In consequence, God knows how many, Sikh young men have been arrested, some (maybe all) have been tortured and insulted in a bid to demoralize and demonize the people in order to secure them in eternal slavery by total denial of constitutional and innate human rights.

From the conduct of our police, closely observed over the last half a century, we believe that this is an instrument whereby the authorities seek to perpetuate illegal and immoral domination over those who have elected them to power.

As this letter is being written, news of large scale arrests, presumably in connection with this case, are being made.

Some acquaintance with the psychology of the Indian politicians tells us that it is apparently an unnecessary and misconstrued bid to make the Sikhs perform better against China. It is seen as a psychological goad to make them shed the imposed puerile guilt by offering themselves as frontline warriors.

This is sinister and diabolical as the Sikhs are known to have always performed to their full capacity for the sheer joy of soldiering and have voluntarily embraced onerous duty of defending their hearths, homes, and honor against enemies of varied descriptions.

Neither will reckless brutality deter us from seeking the reopening of the Kartarpur Corridor or seeking friendship with all humans everywhere. (sabh ko meet ham apna keena ham sabhna ke saajan is the doctrine of our faith).

The ruthless misuse of UAPA is now apparent to your leader Kapil Sibal, soon you also will realize, its devastating effect.

This mode of often decimating and periodical culling the young leader has been employed against Punjab for many centuries, without success. Those who are targeted are always the ones, who are altruistic and exhibit enthusiasm in supporting worthy social causes. The current theme in Delhi is to go after those who stood for human rights in the recent past.

Lovepreet Singh of Kaithal has been prominent in serving food to our brave sisters and daughters of Shahin Bagh, who by their glorious fight against repression have earned the respect of all humankind. More about others will be known as time yields additional information. This is the lesson of many happenings in the past.

Another case which has just concluded (hopefully), concerns Iqbalpreet Singh of Fatehgarh Sahib, a mere lad, who was roughly snatched from his mother’s lap and arrested from his house at night. He was falsely accused of firing upon a Shiv Saina worker, was brutally tortured in illegal custody for 15 days, and eventually released only because the court for once attended to the pleas of competent lawyers defending him.

Such luxuries are denied to many unfortunate ones. Indeed, the victims are carefully chosen according to their incapacity to defend themselves. I have seen (in a sensitive video) the tears of his mother falling like copious rain. I have no doubt that they will eat into the soul of the wrongdoers.

It is a wonder that the three-year-old Maur Mandi bomb blast case, which has been almost fully investigated, is being deliberately delayed to defend the known, and all but designated, culprits.

Mr. Chief Minister, Punjab had voted you into power in the expectation that you will help us in getting rid of this never-ending extreme barbarity in police uniform. Sadly, over the last three years or so, Punjab has learned that you are next to none – not even the worst when it comes to Sikh baiting.

We see you slithering close and closer to the butchers of Punjab, Beant Singh, and KPS Gill. Sadly, we also know that your Police cannot do all this unless you expressly want them to do it. Having known you for long years, we are extremely distressed to observe humanity being eroded so fast under your watch.

Like all helpless, weak, and enslaved people, we fervently appeal to you to wake up and remedy matters before the silent stick (Justice) of Akalpurakh rise against you to strike.

We wish you well and expect you to spare such spectacles to the citizens of our era by strictly upholding the law relating to public order.