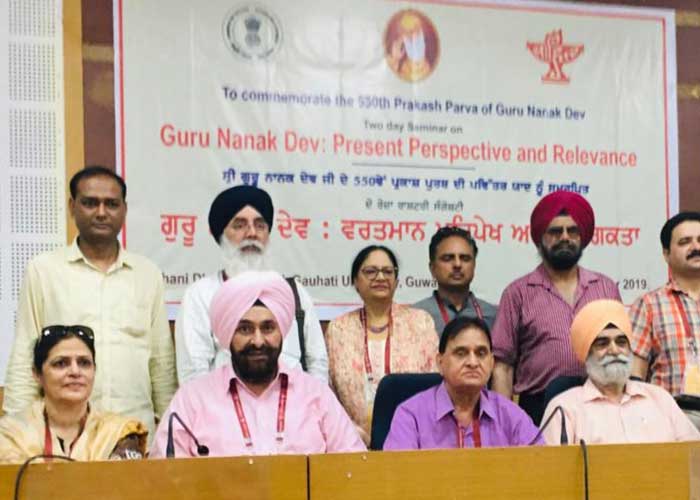 Prof Gurbhajan Singh Gill, former president, Punjabi Sahit Akademi Ludhiana chaired a session in this ongoing conference today. He informed that renowned personalities from across the country are attending this two-day conference.

In his welcome address, Dr K Sreenivasrao, Secretary, Sahitya Akademi said that Shri Guru Nanak Dev Ji gave us the concept of respecting all religions. “His vision and perspectives are more meaningful today,” he said.

Among several reasons behind farmer suicides is also that an individual has become a unit. He does not address issues collectively; he lives and dies alone. He gets lost in the jungle of helplessness.

Remember Shri Guru Nanak Dev Ji’s line, “Jab lag duniya rahiye Nanak, kich suniye, kich kahiye (As long as you are alive, say something, hear something)”. We should not close the windows of our mind. If we discuss our problems, sorrows, and differences, we are bound to find a solution,” he said.

Prof Gurbhajan Singh Gill further stated that on the occasion of the 500th birth anniversary of Guru Nanak in 1969, there was all-round development of Punjab.

“Nearly 70 new colleges were opened, 50 in rural areas, to mark the anniversary. I am also a beneficiary of one such college. My dream of getting higher education may have remained a dream had it not been for the opening of Guru Nanak College, Kala Afghana.

In line with Guru Nanak’s vision, the policymakers addressed the challenges Punjab faced 50 years ago by making villages equal partners in development. Today, we stand at a crossroads. We are presenting Kartarpur Sahib corridor as an achievement, whereas it is only repentance for a 70-year-old mistake.

Both sides have got a chance to pat their own back. Internationally, the big achievement is setting up of Guru Nanak Dev University at Nankana Sahib. It is indeed an achievement to have a Muslim country name an institution of higher education after a universal hero,” he stated.

He further said, “Guru Nanak gardens and jungles are being grown in the name of conservation, and there is a target to plant 550 trees in every village. But how about giving 550 books to each village library? Guru Nanak was all for learning and teaching. Let us have ‘shabd langar’ in gurdwaras on the anniversary to motivate Punjabis to gain knowledge.”