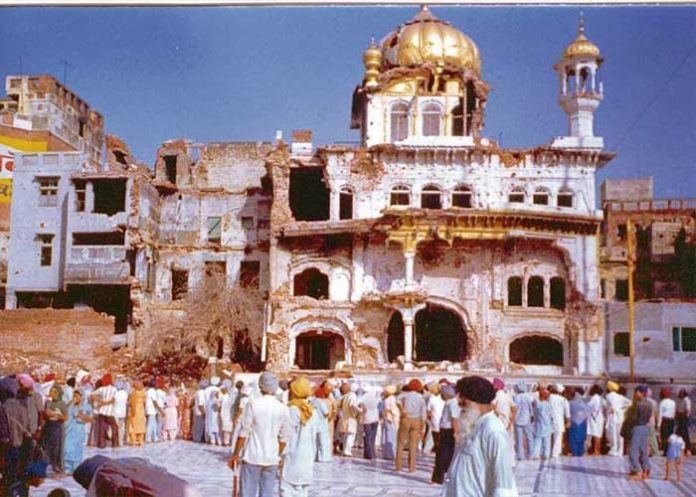 Security agencies were put on alert in Punjab and vigil increased in and around the holy city of Amritsar, around 250 km from state capital Chandigarh, ahead of the 36th anniversary of Operation Blue Star on Saturday.

Operation Blue Star was carried out by the Indian Army at the Darbar Sahib complex between June 1 and 8, 1984.

Despite coronavirus restrictions, Punjab Police, paramilitary forces and intelligence personnel have been positioned at sensitive places across Amritsar, particularly in the congested walled city area where the Darbar Sahib, popularly known as Golden Temple, complex is located.

Every year, prayers are held at the Akal Takht, the highest temporal seat of the Sikh religion, by radical Sikh organisation Dal Khalsa to mark the anniversary of the Army operation carried out to flush out heavily-armed terrorists from inside the complex.

As for threats to peace due to observance of Operation Blue Star anniversary, Chief Minister Amarinder Singh said on Friday that nobody would be allowed to disrupt the peace of Punjab, which had lost 35,000 lives during the dark days of terror.

“No Punjabi wants this,” he said, adding that it was only a handful of anti-India elements that continued to try and provoke people in the name of Khalistan every now and then.

The banned US-based Sikhs For Justice had given a call to the Sikhs in Pakistan to reach Kartarpur Sahib in Narowal district on June 6 and perform ‘ardas’ (Sikh prayer) there as the Punjab government has allegedly “deployed forces to stop the Sikhs in (Indian) Punjab”.  (Agency)