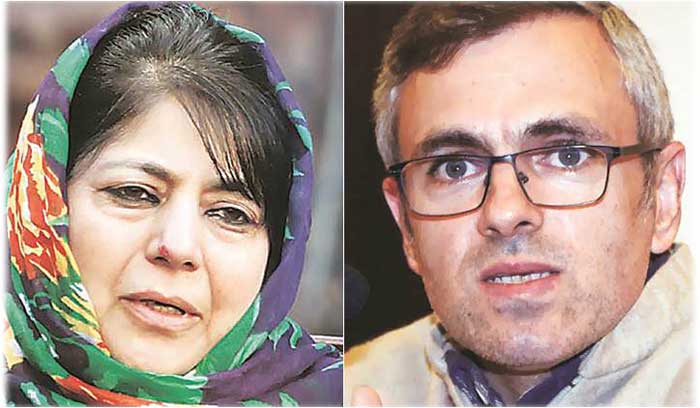 Confirming that a Public Saftey Act (PSA) has been slapped on former Chief Minister Mehbooba Mufti, her daughter Iltija Mufti on Thursday said that her mother received a PSA order sometime back.

“Slapping the draconian PSA on 2 ex J&K CMs is expected from an autocratic regime that books 9 year olds for aseditious remarks’. Question is how much longer will we act as bystanders as they desecrate what this nation stands for?” Iltija Mufti, who operates Mehbooba Mufti’s Twitter account, tweeted.

Former Jammu and Kashmir Chief Ministers Omar Abdullah and Mehbooba Mufti are likely to be booked under the Public Safety Act (PSA), sources said on Thursday.

Both the senior Kashmir politicians have been under preventive detention under Section 107 of the CrPC ever since the abrogation of Article 370 of the Indian Constitution, which granted a special status to the erstwhile state of Jammu and Kashmir, on August 5 last year.

Earlier on Thursday, National Conference (NC) General Secretary Ali Muhammad Sagar and senior Peoples Democratic Party (PDP) leader Sartaj Madani, an uncle of Mehbooba Mufti, were booked under the PSA, under which a person can be detained for up to two years without trial.

Omar’s father and former Chief Minister Farooq Abdullah has already been booked under the PSA and lodged at his Srinagar residence, which has been designated as a sub-jail.

Speaking on the Motion of Thanks on the President’s address in the Parliament on Thursday, Prime Minister Narendra Modi said that Mehbooba Mufti had said on August 5 that India had betrayed Kashmir.

Modi said: “She said we made the wrong decision in 1947… Do the people here support these statements? Omar Abdullah said abrogation of Article 370 will bring such an earthquake that Kashmir will separate from the country. Farooq Abdullah said the abrogation will open the way for Kashmir’s independence… Can anyone agree with such language?”

Modi asserted that the government won’t allow peace to be disturbed anywhere in the country, be it Kashmir or the northeast.

Meanwhile, Sagar and Madani were booked under the PSA after both were shifted from the MLA hostel here, where they were detained since November, to a government building on Gupkar Road in Srinagar.

Sagar and Madani were detained on August 5 along with around 50 other mainstream politicians of Kashmir. Most have since been released.

Sagar was allegedly very vocal against the abrogation of Articles 35A and 370.

“He was involved in instigating the youth, especially party workers, against the government of India’s decisions. His capacity to disturb public order can be gauged from the fact that he succeeded in mobilising voters at the peak of militancy and poll boycotts,” a dossier on the NC leader read.

The PSA dossier on Sartaj Madani alleged that he played a “pivotal role” during Asiya and Nelofar’s alleged rape-murder case in 2009.

“He played a vital role in mobilising anti-social elements. He was also involved in provoking people to come on the streets and actively support separatists and propagate secession of J&K from Union of India, especially after Afzal Guru’s hanging,” the dossier said.   (Agency)