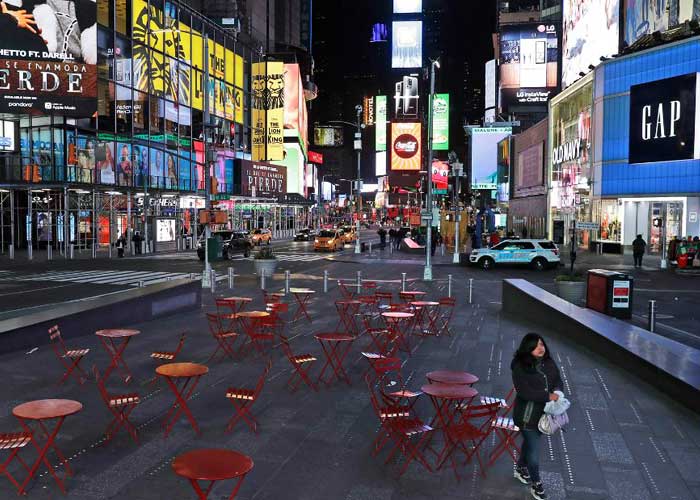 US President Donald Trump has backed off his threat to quarantine Covid-19’s epicentre, New York City area, but the Centre for Disease Control and Prevention (CDC) issued an advisory asking people from there to not to travel.

Earlier on Saturday, Trump had that he was looking at a quarantine of parts of New York, New Jersey and Connecticut at the request of other states that don’t have much coronavirus infection.

But later on Saturday night he tweeted: “On the recommendation of the White House CoronaVirus Task Force, and upon consultation with the Governors of New York, New Jersey and Connecticut, I have asked the @CDCgov to issue a strong Travel Advisory.”

The advisory will be administered by the governors of those states in consultation with the federal government, he added.

The CDC issued the advisory urging people from the area “to refrain from non-essential domestic travel for 14 days effective immediately” because of the “extensive community transmission of COVID -19 in the area”.

It added that “The Governors of New York, New Jersey, and Connecticut will have full discretion to implement this Domestic Travel Advisory.”

New York Governor Andre Cuomo, who has been issuing dire warnings about the spread of coronavirus in the state, said he did not think a quarantine could be legally enforced.

“I don’t even like the sound of it (quarantine),” he said.

But Florida Governor Ron DeSantis expressed support for a quarantine.

He said: “I just think it’s bad policy to have people dispersing from there, and then seeding in other parts of the country, including the state of Florida.”

The Trump administration had already asked people travelling from the New York area to self-isolate themselves for 14 days.

The spread of Covid-19 is uneven in the US. Of the 50 US states, six sparsely populated states have reported less than 100 cases and six others less than 150.

States like Texas and Florida have imposed a 14-day quarantine on visitors flying in from the New York area.

Rhode Island has gone further with state police troopers stopping cars with New York licence plates and having plans for National Guard and police doing house-to-house searches to ensure people who have come from New York are observing self-quarantine.

Trump floated the idea of quarantining the New York area when speaking to reporters before leaving for a Navy base in Norfolk to see off a hospital ship with 1,000 beds that he was sending to New York to augment its medical facilities.

He also said that it may not be necessary.

He also ordered the Army Corps of Engineers to build field hospitals in the state with a capacity of 4,000 beds, in addition to the four he had sanctioned earlier with 4,000 beds.   (Agency)