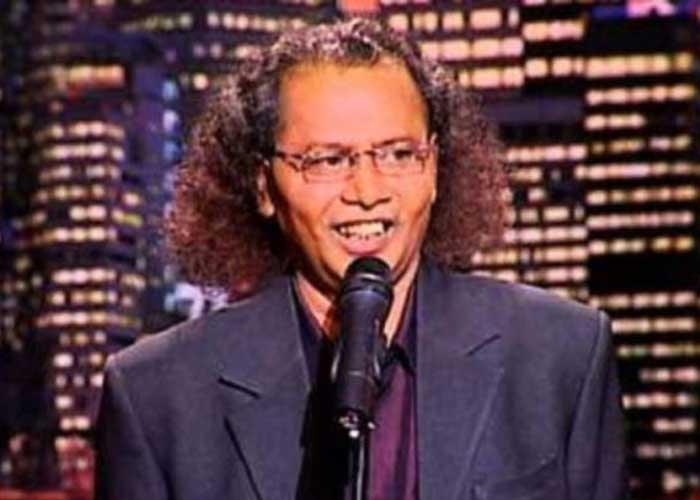 Say a prayer & then laugh. He’s dead, but he’ll appreciate.

His stand up acts, jokes, wisecracks, wipe outs, squelches often targeted the poor man. To someone new to the Pakistani comedy, some of his jokes could seem to be in poor taste. But gradually one would start getting them finally: Beneath this man making fun of the poor man’s predicament was a life lived in and with the pain of extreme poverty.

He knew the poor. He was one. He would often narrate a story about the day his mother asked him to go and gather the peels of green peas someone had thrown in the street outside. She washed and cooked those peels for a meal.

For the dirt poor family, it was a routine day. “Hai ta matar de chilke si par khair, subzi theek si. Us din swad bani si.” He would tell the story, and laugh. In his voice, the audiences would meet poverty and cry. And this man was telling them a joke.

He was what most people would describe as ‘anpadh’, or uneducated. Still, audiences, including the most erudite academicians, playwrights, politicians in his country, would vie for a chance to watch him in person.

Known as the King of Comedy, Pakistan’s Amanullah Khan passed away this Friday, leaving behind millions of fans who grieved in a fashion most peculiar: they recalled his jokes, laughed at them heartily, shed tears, cried and felt the pain of a most beloved man bidding his final adieu.

Amanullah Khan ruled Pakistan’s commercial theatre scene for decades, was a superstar with his fan following much like Bollywood heroes, but always stayed close to the pulse of the masses.

He bothered little about the powerful. With General Zia ul-Haq in the front row, the administrators ran helter-skelter as Amanullah Khan announced from the stage that he is going to describe how a fauji afsar, a military officer, flies the kite.

For the next half an hour, as top bureaucrats and military officers trembled with what they thought would happen next, Amanullah Khan had a field day making fun of the army honchos.

By the time he was through, the General was clutching his belly, unable to stop laughing, and finally stood up and opened his arms to hug Amanullah Khan.

There isn’t a politician in Pakistan, or a film star, or a theatre person who doesn’t count himself a fan of Amanullah Khan. Many comedians call themselves the followers of the Amanullah Khan School of Comedy.

Born in Ramchakdas village near Gujranwala in 1952, Amanullah Khan lived in Lahore.

Recalling his childhood days, Sohail Ahmed of the Hasb-e-Haal fame said Amanullah Khan would often say that the Data Darbar in Lahore was his school and university. Residing near Data Darbar, he would sell sweets, toffees etc, and all this while indulging in sheer antics that would ensure that a crowd gathered around him, jacking up his sales.

Stories about how he chanced into theatre with his maiden play, Sixer, at Alhamra, and how at one time Alhamra did not allow him to perform are the stuff of legend now. His self-depricating jokes started a trend that still rules the roost in Pakistani comedy, much appreciated here in India, too, as YouTube facilitated cultural consumption in times of bitter India-Pakistan political rhetoric.

Bashira in Trouble, Sab Se Bara Ruppaiya, Saadi Vi Suno, Disco Deewanay and Aik Biwi Ka Sawal, one after the other, Amanullah did both things at the same time: he would do the same thing time and again, and yet with every play or serial, he would break new ground.

His comedy had the essence of Punjabi humour, and many would claim that it was essentially Punjabi comedy, but he was loved by the entire Urdu world. Punjabis on this side of the border considered him their own. Sohail Ahmed said the first phone he received, after he was informed by Amanullah’s son about the actor’s demise, was from Daler Mehndi.

Amanullah, along with Babbu Baral and Sohail Ahmed, had visited India on Mehndi’s invitation. Newspapers in Pakistan carried details of emotional scenes at his residence where numerous stage artistes, relatives, friends and fans broke down. Nasir Chinioti cried loudly, wailing publicly, saying Amanullah was like a father to him. “He taught me how to act on stage, he taught me how to live.”

Actor after actor called him an institution, a description he heard from many in his lifetime, too.

A career spanning 45 years, almost 2,000 plays, many films and innumerable television shows, Amanullah Khan’s work was pivoted on his powers of observation of the life of people around him. He would make fun of everyone, and he would spur comedians much junior to him to make fun of him.

He enjoyed being made fun of, and he enjoyed making fun of others, and in this process, he would take the audiences by the scruff of their neck and forced them to look at the peculiarities and incongruities of life. In his last years, he worked with Aftab Iqbal in late night shows including Khabarnaak and later Khabarzar.

He is survived by his three wives and 14 children, and a million jokes and a billion plus prayers, and the part of the world that’s full of laughter. Given a chance, he would have drowned the India, Pakistan hatred in jokes about our poverty. And we aren’t joking. We are dead serious. Sorry, he’s dead. We’re serious.