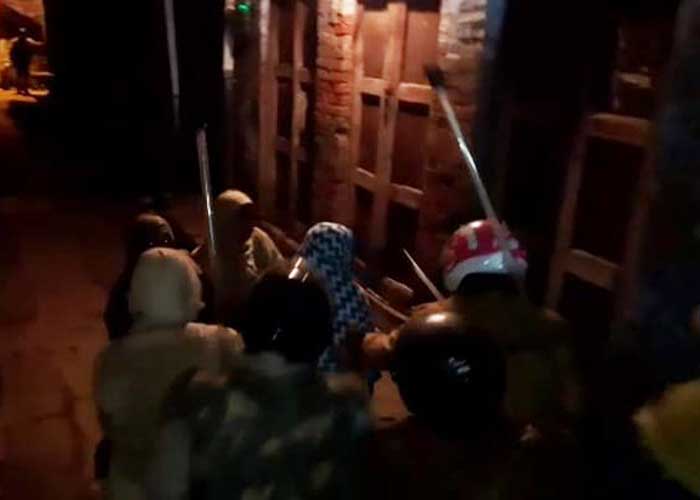 The police in Etawah district chased and caned women protesters who had started a dharna against the citizenship law. A video clip that has gone viral on the social media on Wednesday, shows policemen chasing women, caning them and also barging into shops to force their closure.

The clip shows cops chasing women into the narrow lane of Pachraha area.

In a 17-second clip, the women can be heard shouting and asking the police why they are being assaulted. The police is also seen lathi-charging men who had gathered in the area.

In another video, cops are seen entering a roadside eatery and hitting the employees inside and forcing its closure. Cops are further seen hitting a roadside vendor and asking him to shut shop. A cop is also heard abusing protesters.

According to reports, the protest had taken place in Pachraha on Tuesday with about 150 women sitting on dharna. The numbers swelled by evening and more than 500 women were present when the police crackdown began.

Meanwhile, the Etawah police said in a tweet that the protesters had first pelted stones at the cops.

Protests are going on in various parts of the country over the Citizenship Amendment Act (CAA), which the government says will help minorities from Muslim-dominated Bangladesh, Pakistan and Afghanistan to get citizenship if they have fled to India because of religious persecution.

Critics of the law, among whom are students, activists, politicians, women and a number of celebrities, say the CAA, along with the National Register of Citizens, the other controversial process meant to flush out illegal migrants, would be used to target Muslims.

Lucknow has been the epicentre of protests in Uttar Pradesh.

Addressing a pro-CAA rally on Tuesday in Lucknow, Union Home Minister Amit Shah had said that the citizenship law would not be withdrawn come what may.  (Agency)

It seems, these are the brave jawans of #UPPolice under the able guidance of Maryada Purshottam @myogiadityanath , lathi charging women at #CAA_NRC_Protests in #Etawah . #CAA_NPR_NRC pic.twitter.com/aFWqzfwz4a