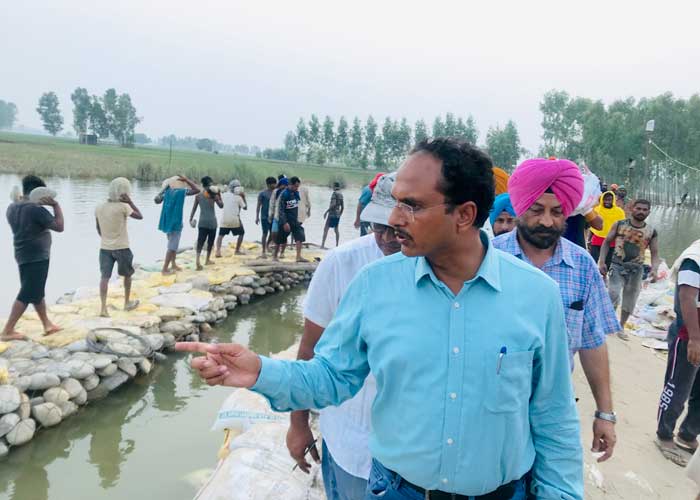 In a major breakthrough, the work of plugging the 500 feet wide breach at Jania village has crossed the halfway mark and was expected to be completed by Sunday night.

He said that technical guidance for the whole plugging operation was being provided by engineers of army and drainage department.

Mr. Sharma said that by Saturday more than 325 feel sand bag embankment and 325 feet stone embankment has been built to plug Jania Chahal breach adding that it was being plugged under the direct supervision of the Indian Army who was constructing a ring of boulders besides plugging the breaches with sand bags.

Deputy Commissioner said that a total of 20 lakh sand bags, 5 lakh cubic feet boulders and 1000 quintals of Steel wire were required to fill the breaches in Shahkot Sub Division.

He said that in order to ensure that the work of plugging was conducted smoothly the uninterrupted supply of boulders have been ensured by Punjab government from Pathankot adding that these boulders were being dumped at grain market in village Kamaalpura from where they were ferried to Jania breach in tractor trolleys.

Likewise, Mr. Sharma said that sand bags were being filled by 3200 MGNREGA workers and Panchayats of various villages.

Meanwhile, Superintendent Engineer Drainage Mr. Manjeet Singh, who was personally supervising the entire plugging operation, said that the work for plugging the breach was going round the clock. He said that they were making strenuous efforts to ensure that the work was completed by Sunday night.