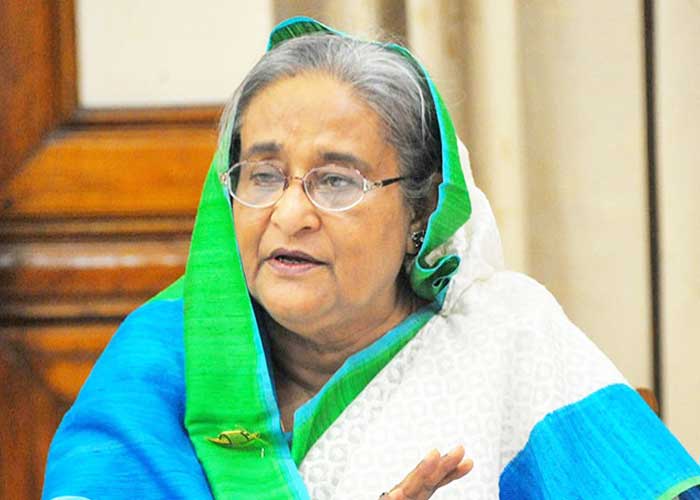 India’s ban on export of onions has even affected Bangladesh Prime Minister Sheikh Hasina’s kitchen. The visiting PM said in a lighter vein that she has instructed her cook not to put onions in all the dishes due to the escalating prices.

Addressing the India-Bangladesh Business Forum here on Friday, Hasina said in Hindi, to everyone’s pleasant surprise, that her country has been put to some trouble due to the ban on onion export by India.

“I don’t know why you stopped onion export. If we had got some prior notice we could have arranged for imports from elsewhere. I have instructed my cook not to put onions in all the dishes. In future, if there is a plan for such a move, please let us know in advance,” leaving her audience in smiles.

The Indian government on September 29 banned the export of onions, due to the heavy rains spoiling onion crop in large parts of the onion producing states.

Bangladesh meets most of its onion requirement through import, mostly from India.

In her speech, Hasina urged big Indian investors to set up industries in Bangladesh and export the products to the vast markets in India and Southeast Asian countries, taking advantage of the improved connectivity.

“We want to see trade and investment together where Indian big investors can set up industries in Bangladesh and export the products to the north-eastern states of India and to the Southeast Asian countries, taking advantage of the improved connectivity between us,” she said.

Hasina said the strategic location of Bangladesh provides “tremendous potential” for being the economic hub of the region. “With India on the west, China on the north and Southeast Asia on the east, Bangladesh is in the middle of a combined market of 4 billion people.”

“Together, we would build ‘Sonar Bangla’ or Golden Bangladesh, as dreamt by the Father of our Nation, Bangabandhu Sheikh Mujibur Rahman,” Hasina said.

The Bangladesh Prime Minister said her country has the most liberal investment policy in South Asia, and it includes protection of foreign investment by law; generous tax holiday; concessionary duty on import of machinery; unrestricted exit policy; full repatriation of dividend and capital on exit, to name a few.

She said foreign investment is protected by relevant acts of Parliament and bilateral investment treaties.

“We are in the process of establishing 100 Special Economic Zones,” she said, adding that a dozen of them are ready with four allotments to three countries.

A number of high-tech parks are also ready for technology and innovative enterprises. Bangladesh has offered three Special Economic Zones for Indian investors at Mongla, Bheramara and Mirsarai, said the Prime Minister.

Hasina said trade and investment between the two countries was increasing.

The volume of bilateral trade has steadily grown during the past years and the balance of trade, however, is still largely in India’s favour.

The volume of trade between two countries is nearly $10 billion, she said.

“So, the progress is visible, but there is a lot of scope for further deepening our relations in the area of trade and investment,” she added.

The relations of Bangladesh with India reached the best ever stage, with Indian Prime Minister Modi calling it a “Sonali Adhyay”. “We are confident that in the coming years, we will further lift our relations to new heights.”

“Despite profound geopolitical changes and challenges, we have been able to strengthen and consolidate our relations, based on the principles of mutual benefit and a shared future.”