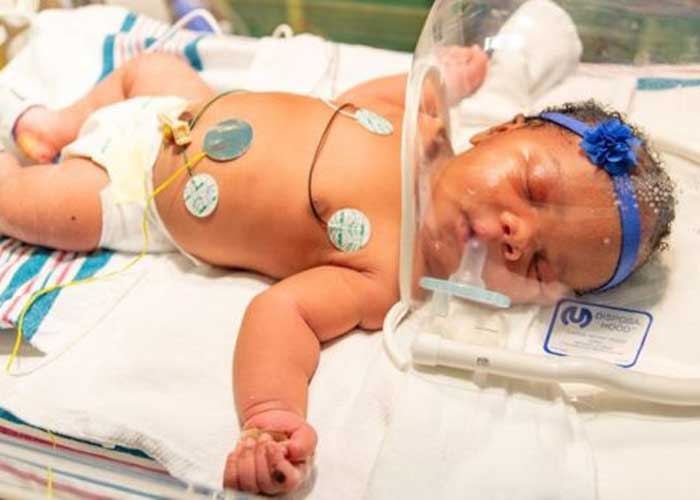 A mother in the US called her newborn daughter a “little miracle” as she was born on the anniversary of the 9/11 attacks at 9.11 p.m. weighing 9lbs 11oz.

Little Christina Brown came into the world at Methodist LeBonheur Hospital in Germantown, Tennessee. “She is a new life amongst the devastation and destruction,” said her mother Cametrione Moore-Brown.

Baby Christina was born after a Caesarean section and operating theatre staff were stunned when the baby’s time of birth and weight were recorded, the BBC reported.

“We heard the doctor announce the time of birth 9/11 and then when they weighed Christina, we heard gasps of astonishment when everyone realized Christina weighed 9/11, was born at 9.11 and on 9/11,” said father Justin Brown.

“It was really exciting, especially to find some joy during a day of such tragedy,” he added.

Commemorations were held across the US to mark 18 years since the attack on September 11, 2001.

Rachel Laughlin, head of women’s services at the hospital said such a coincidence was extremely rare. “I’ve worked in women’s services for over 35 years and I’ve never seen a baby’s birthdate, time of birth and weight all be matching numbers.”

The 18th anniversary of the attack saw a moment’s silence take place at various locations, including the sites of the attack — “Ground Zero” in New York, at the Pentagon in Virginia, and at Stonycreek Township in Pennsylvania.

Nearly 3,000 people were killed in the attacks and thousands more were injured.  (Agency)