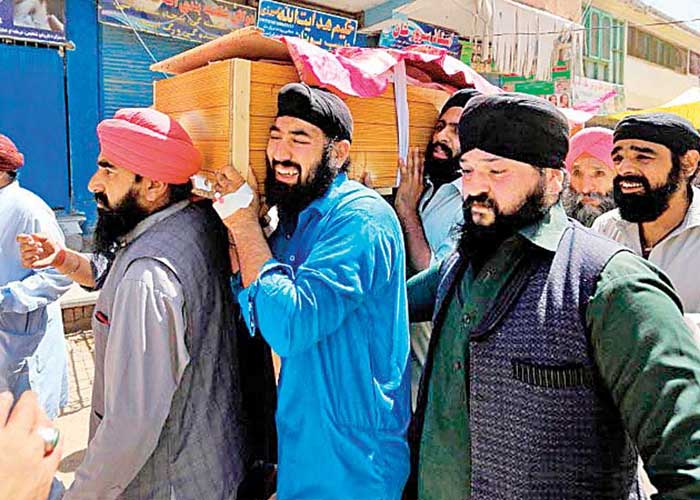 The Sikh worshippers had gathered to pray for the world in response to the Covid-19 pandemic that has gripped the globe. Sadly their prayers were shattered by the bullets of terror.

United Sikhs is in touch with the families on the ground and has setup a GoFundMe page along with Facebook campaign for urgent assistance to the Afghani Sikhs impacted by this horrific act of violence. The assistance will be two-folds – Advocacy to rehabilitate and Humanitarian Aid for urgent and emergency needs.

United Sikhs urges the United States, Canada, Australia, United Kingdom, France, Germany, India, Pakistan and other countries to answer the plea of the Sikhs and give them Special Protected Status. Special entry into their countries via protected asylum, relocation, security and/or rebuilding efforts must be undertaken on an urgent basis.

United Sikhs is working with the United Nations Secretary General, Antonio Guterres to speed up the migration of the Afghan Sikhs with UNHCR. We realize that the only plausible option is international resettlement along with a process where the Sikh heritage in Afghanistan can be preserved.

In the past 48 hours United Sikhs has contacted the Afghan Sikh community in Afghanistan to assess their immediate needs through our chapter in Peshawar, Pakistan.

Our legal wing has contacted the Afghanistan Ambassadors in the USA, Canada, UK, Australia and Kenya to seek security and safety of all remaining Sikhs in Afghanistan.

We have reached out to the UN Rapporteurs to familiarize them with the issue at hand while seeking migration assistance for the Afghan families. We have urged the global community on social media to write to their congressmen, members of parliament and relevant law makers asking them to condemn this terrorist attack.

United Sikhs has been advocating for the Afghan Sikhs since 2015 when refugee status was sought in Canada with the leadership of Alberta MLA Manmeet Singh Bhullar before his tragic passing.

In 2018 after the Jalalabad bombing left 12 Sikh leaders dead, United Sikhs presented before the 39th session of the Human Rights Council the plight of the Hindus and Sikhs in Afghanistan.

Later that year a petition was filed in the Canadian Parliament seeking safe passage. In the USA, over the past few years, the State Department has been approached as well as direct meetings taken place with Ambassador Brownback of the Office of International Religious Freedom.

Alarmingly, a second attack occurred when an explosion jolted the grieving families while performing the final rites of the deceased. Afghanistan has historically been home to hundreds of thousands of Sikhs for centuries.

However due to the constant targeted violence the Sikh population has dwindled to barely one thousand, made up of less than 300 families, with only a few gurdwaras (houses of worship and learning) functioning in the country.

One of the reasons some have been hesitant to leave Afghanistan has been to safeguard and protect their historical institutions. However with the constant carnage and devastation there remains very little in an alternative.