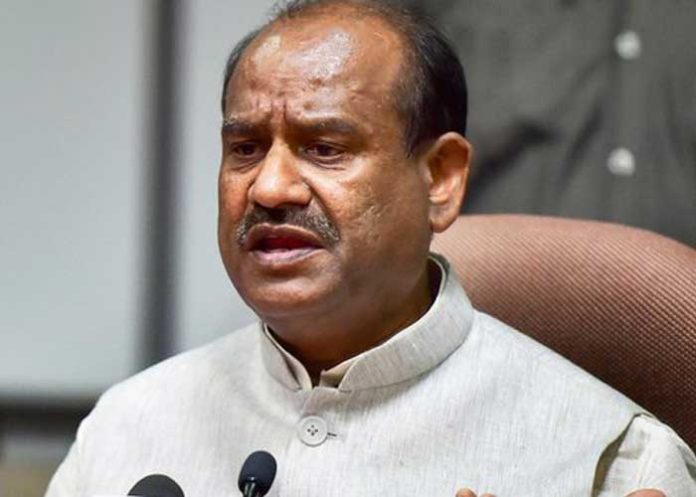 After the Lok Sabha witnessed shoving, blocking ways and shouting at each other to the degree that Speaker Om Birla had to adjourn the house for on Monday, he put forward two very straight conditions in front of members for the way forward, on Tuesday, before the house reconvened.

But what proved to be the bone of contention was the second condition. Birla clearly warned against bringing any placards inside the house. He is believed to have warned, those failing so, regardless of parties they belong to, may face action by the Chair. While most political parties including the ruling BJP and the opposition Congress agreed to it, sources say, few “young MPs” who are particularly hailing from Kerala had “strong objections” to it.

This effort which is touted as the “peace initiative” by Birla to end stalmate came after a ruckus broke out in Lok Sabha on Monday when both Congress and the BJP came face to face which was followed by minor shoving as well. It all started when Congress members came down to the treasury benches as BJP’s chief whip in the Lok Sabha, Sanjay Jaiswal was speaking in the house. Soon, BJP members like Ramesh Bidhuri came to Jaiswal’s rescue.

A group of women BJP members of parliament too went and met Om Birla to raise the issue of alleged attack on Meena and its Chikkamagaluru MP Shobha Karandlaje.

In fact, in a complaint to Om Birla, Karandlaje wrote, “I am appalled to report to you the misbehaviour thrust upon senior MP Jaskaur Meena by Congress MPs…. That a senior member can be jostled in the house is against all norms of decency.” Calling it a “perverse desire to vitiate the proceedings”, Karandlaje asked for the expulsion of the Congress MP.

However, as soon as the house resumed, ruckus broke out. As Congress’s Adhir Ranjan Chowdhury, DMK’s T.R. Balu upped the ante over Delhi violence that has killed 45 people so far, a visibly agitated Birla asked, “Announce and make yourself clear whether you want to run the house with placards and banners.”

But after all the peace initiatives, the matter came back to square one, from where the way forward seems extremely tough for the Lok Sabha Speaker.  (Agency)