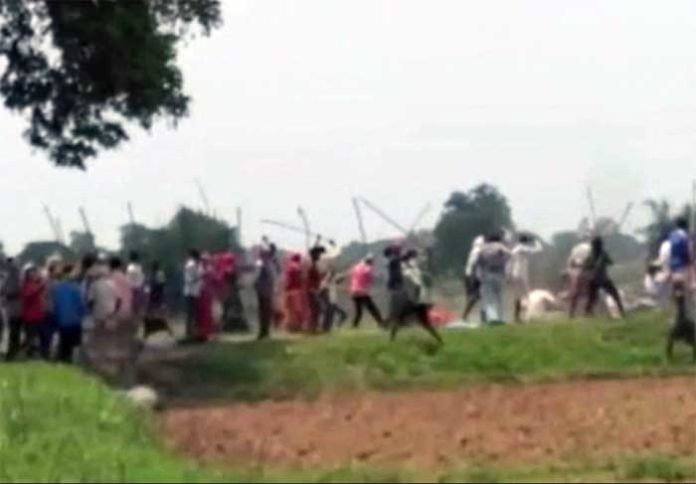 Five days after the gory dance of death played out in Murtiya village in Sonbhadra where 10 people were killed and 24 injured over a land dispute, two videos have emerged on the social media that relive the moments before the carnage took place.

The videos capture the moments immediately before the massacre in which the village chief is seen firing on a group of farmers who had refused to give up 36 acres of land they had tilled for generations.

The videos show tractors lined up on one side of the disputed land and the village head and his men opening fire at the farmers. The scenes are straight out of a Bollywood thriller from the seventies.

Police investigations later revealed that the man who led the attack was village head Yagya Dutt who has now been arrested.

Dutt had brought in 200 armed men on 32 tractors. He claimed that he had bought the land 10 years ago from a prominent local family and it belonged to him.

In the second video which is more frightening than the first, the attackers can be seen beating the villagers with sticks. Gunshots are also heard in the background and one of the victims is seen falling to the ground.

A woman can be heard screaming in the background, “Police ko bulao.”

The police, reportedly, arrived half an hour after the shooting and the delayed response has raised several questions about the involvement of the cops in the incident.

The videos were reportedly taken on a phone by a villager and circulated locally till they made their way to journalists on Monday morning.

An eye witness had told reporters that “The village head and his men came and started firing. Once people started falling to the ground, they started hitting them with lathis. It was horrifying.”

Despite the gravity of such a crime in broad daylight, in full public view, Uttar Pradesh Chief Minister Yogi Adityanath visited Sonebhadra on Sunday, a day after Congress leader Priyanka Gandhi tried to visit the village and was stopped.

The Chief Minister not only accused Priyanka Gandhi of “shedding crocodile tears” but also termed the incident as a “political conspiracy” since the land dispute dates back to 1955.  (Agency)