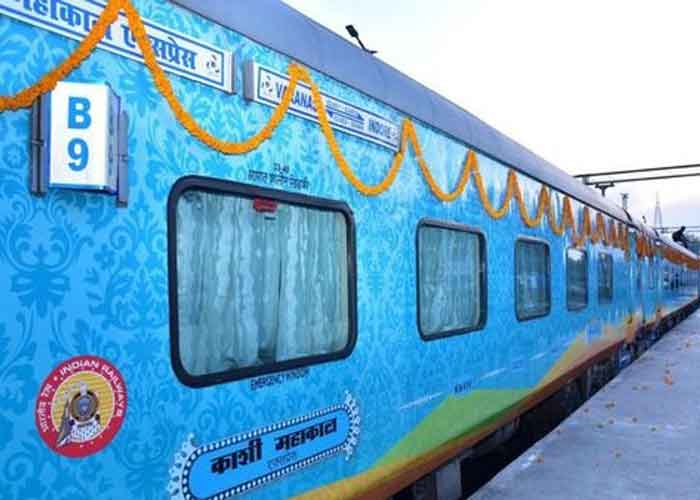 Northern Railway spokesperson Deepak Kumar said: “It is for the first time that a seat has been left reserved for a deity.”

“One seat in Kashi Mahakal Express (seat number 64 in B5 coach) has been left reserved for Lord Shiva,” he said.

“Even a temple has been drawn on the seat to make people aware that the seat is reserved for Lord Mahakal,” he said.

IRCTC’s Director, Tourism, Rajni Hasija said that the practice would continue beyond the inaugural run.

Prime Minister Narendra Modi flagged off the Kashi Mahakal Express via video conferencing from Varanasi, where he is all launched several projects worth Rs 1,250 crore during the day’s visit to his parliamentary constituency.

Also connecting the industrial and educational hub of Indore, with Bhopal, the train will begin its commercial run from February 20.

“The Kashi Mahakal Express will operate three days in a week and it will be a bi-weekly service through the Sultanpur-Lucknow route and a weekly service via the Prayagraj route,” Kumar said.

Elaborating on the two routes from which the train will pass every week, Hasija said: “Once the new train starts its regular run from this week, it will depart from Varanasi at 2.45 p.m. every Tuesday and Thursday to reach Indore at 9.40 a.m. on Wednesday and Friday.

Similarly, the train will start from Indore at 10.55 a.m. every Wednesday and Friday and will reach Varanasi at 6.00 a.m. the next day. This train will have stoppages at Ujjain, Sant Hirdaram Nagar, Bina, Jhansi, Kanpur and Sultanpur stations in both directions.

“This train will halt at Ujjain, Sant Hirdaram Nagar, Bina, Jhansi, Kanpur and Allahabad stations in both directions,” Kumar said.

One-way journey from Varnasi to Indore will cost Rs 1,951, inclusive of four meals.

According to the IRCTC officials, the Indore-Varanasi Kashi Mahakal Express will be the first private train that will run overnight and for a comfortable long distance journey, will feature a host of facilities. The IRCTC will serve vegetarian food, and provide housekeeping services, on-board security services and bedrolls.

The IRCTC officials said that passengers will also get complementary insurance of Rs 10 lakh.

The train will have an advance reservation period of 120 days and will only have the general and foreign tourist quotas. The current booking will be available to the passengers on the platform itself after preparation of first chart, four hours to five minutes before the scheduled departure of the train.

The train has silent features like CCTV cameras, which will be monitored online around the clock from the IRCTC centres, whereas for the first time the IRCTC has brought the marshals in the train for passengers safety and also to make people aware to not smoke inside the train as it has smoke and heat sensors installed in the coaches as well as in the bathroom.

For the blind passengers, the train coaches have the seat numbers written in Braille, and the catering staff will be dressed in yellow kurta-pyjamas with a rudraksh malas on their necks to promote the train’s theme.  (Agency)