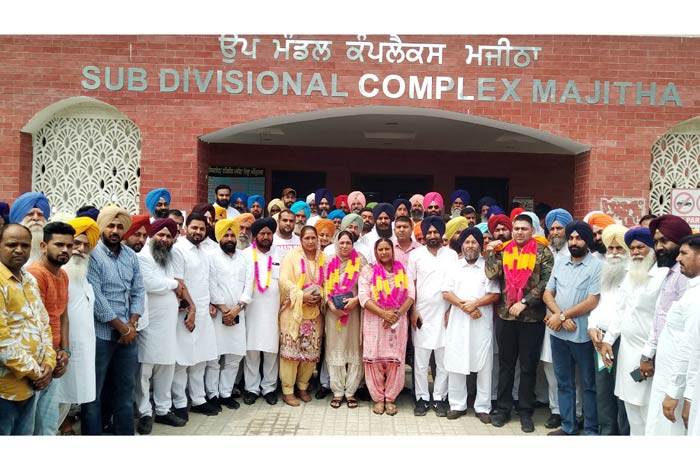 Showing an exceptional victory over its rival Candidates during the election of Chairperson and vice-chairperson of the Block Samiti, Majitha, the Shiromani Akali Dal (SAD) candidates Mrs. Amarjit Kaur dadupura W/O Dhir Singh Dadupura and Mrs. Karamjit Kaur Shahzada W/O late Khazan Singh Shahzada have been elected to the coveted posts respectively with getting the support of 20 out of 24 Samiti members presented during the contest conducted by SDM Mrs. Alka Kalia.

Expressing satisfaction over the unprecedented success of SAD candidates, former minister S. Bikram Singh Majithia thanked the almighty. He said the Congress party had won the Panchayat elections by rigging the entire poll process through sheer misuse of official machinery across the state.

Despite the repressive methods of the ruling party, the people of this area voted for the SAD candidates and reposed their faith in the SAD. He asked the newly elected incumbents to serve the people with utmost honesty and hard work.

Newly appointed Chairperson Amarjit Kaur Dadupura and Vice Chairperson Karamjit Kaur Shahzada thanked the SAD president S.Sukhbir Singh Badal, S. Bikram Singh Majithia and all block Samiti members of SAD for handing over big responsibilities to them. They assured that they would not leave any stone unturned for addressing the problems of the people.

On this occasion, SGPC members S. Santokh Singh Samra and Bhagwant Singh Sialka also congratulated the SAD workers for this victory. Appreciating S. Majithia for playing a key role in the all-round development of the area, they assured that they would keep writing this success story in the future also.

They informed that all four Congress members remained absent from the fray, adding that the SAD has always honored the hard-working and dedicated workers with great responsibilities.