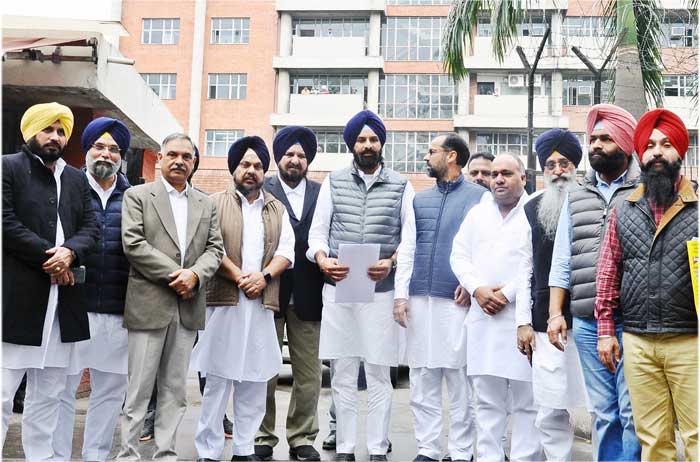 They also asked the DGP to direct the Batala police to record the statement of the victim family immediately.

The SAD legislators, who were led by Bikram Majithia, showed documentary evidence to the DGP to prove that Bhagwanpuria was issuing threats to Majithia from inside the jail premises after the latter exposed his links with the Jails minister. The legislators said this itself was indicative of the total failure of the Jail administration as well as the total freedom given to gangsters inside jails by the Jails minister.

Stating that while the Jails minister has attacked him from outside jail, Bhagwanpuria and his associates had issued threats from inside jail, Mr Majithia said “is it possible for a gangster to put up my videos from inside the jail premises and issue threats openly without any patronage from the Minister incharge”? He said the Jails ministers’ call records as well as those of his personal assistant should be examined to probe the entire issue thoroughly.

Stating that threats had been issued from two different pages running in the name of Jaggu Bhagwanpuria, the SAD legislators said the gangsters posted “ajhe te bahut kuch hona hai Majithia Sahab” besides claiming they would give an answer at an appropriate time and promising to come back and strike again in the same manner as before.

The legislators said the gangsters even posted a reply on Mr Majithia’s video clip which talked about the increase in the network of Jaggu Bhagwanpuria under Sukhjinder Randhawa’s patronage by claiming the circle of the gangsters would increase even more in coming days. The mlas said Bhagwanpuria even claimed in posts that people were not afraid of him without any reason.

Besides asking the DGP to ascertain how the gangsters were having access to modern electronic equipment in jail, the legislators also demanded a thorough inquiry into the extortion racket of Bhagwanpuria and his associates claiming that the gangster- Minister angle needed to be probed. They also highlighted how the Bhagwanpuria gang was extorting money, indulging in contract killings and running Kabaddi tournaments in which it coerced players to play on their teams.

Stating that the SAD would not rest till the entire nexus was exposed, Mr Majithia said the SAD-BJP government was responsible for sending Bhagwanpuria to jail in 2015. He said if Bhagwanpuria was running a multi-crore extortion racket from Jail as per disclosures made by top officers of Punjab Police, then it was clear that he was getting support from the ruling dispensation.

The legislators also brought it to the notice of the DGP that the gangsters had become so emboldened that they had even celebrated Bhagwanpuria’s birthday in jail and filmed it with multiple cameras and posted the same on social media.

The legislators also demanded an inquiry into the murder of Bhagwanpuria’s wife stating that she was cremated hurriedly the same night without conduct of any post mortem and that the Batala police had hushed up the case.