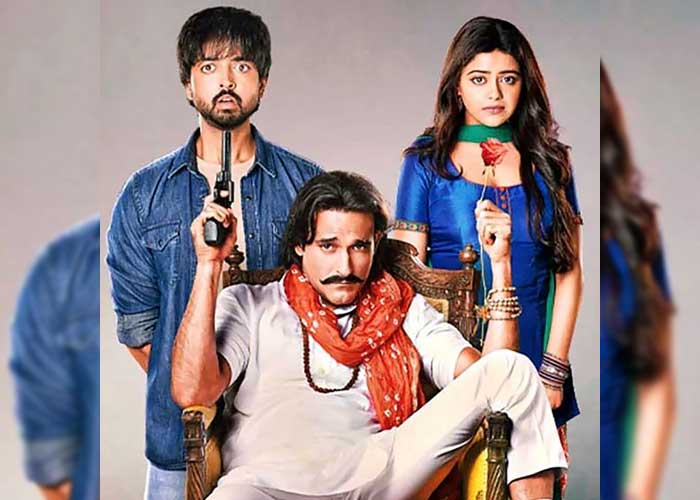 If it wasn’t for Padmini Kolhapure’s son or Ravi Kishan’s daughter, who debut as hero and heroine in this film, you would actually think “Sab Kushal Mangal” is a film straight out of the mid 2000s.

Those were the days when the undeniably talented Akshaye Khanna managed to find his comic groove in the absolutely cheesy fare. A decade and a half later, not much has changed, you realise, watching this mishmash of forced humour and jaded melodrama drawn from many films of that era.

Consider the film’s core idea: It is about a don coming in between the blossoming romance of a young pair. The story would not exactly seem very original (remember the Sanjay Dutt-Aishwarya Rai-Ajay Devgn comedy “Hum Kisise Kum Nahin”?).

For the sake of originality, the characters and context of the plot has been tweaked. For a more contemporary effect, too, “Sab Kushal Mangal” is set in heartland India — the chosen pit stop for any filmmaker who is out to make some quick bucks on a limited budget these days.

The film introduces Padmini Kolhapure’s son Priyaank Sharma as Pappu Mishra, who hosts a television show named “Musibat Odh Li Maine” in a small town of the Hindi heartland. The aim of the show is to expose wrongdoings across various strata of society.

The hotshot TV journalist, an eligible bachelor, is kidnapped by the don Baba Bhandari (Akshaye Khanna), who thrives on the business of forced marriages. Twist in the tale follows when Bhandari falls in love with Mandira (Riva Kishan), the girl he had planned to wed Pappu to.

You don’t need to watch too many Hindi films to know where such a story would lead to, and that is the biggest bane of the film. “Sab Kushal Mangal” struggles at a storytelling level. Debutant director Karan Vishwanath Kashyap and his co-writer Bijendra Karla fail to create enough funny moments that may uphold the film’s entertainment quotient. The story begins to seem predictable after a point.

The film rests entirely on Akshaye’s shoulders. Without doubt, Bollywood’s most underrated actor of his generation, Akshaye showcases trademark restraint as he plays out Baba Bhandari with a fine balance of comic menace and ample drama, never mind the awkward toupee.

On Priyaank and Riva, the two debutants can’t be faulted for not trying hard. But the next time, perhaps, it would do well for both of these budding actors to be more judicious about the script they sign up.  (Agency)