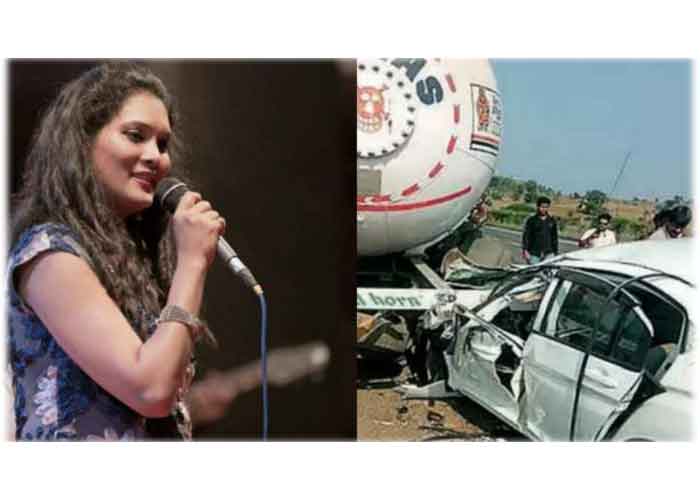 The Marathi film industry fraternity on Friday was devastated after well-known playback singer Geeta Mali was killed in a car crash on the Mumbai-Nashik highway a day ago.

Hundreds of her fans and admirers took to the social media expressing their shock and condolences over Mali’s sudden and tragic death.

According to officials, Mali arrived from the US after a two-month long concert tour and was returning to her home in Nashik when the accident took place near Shahapur village.

Her husband, Vijay Mali, a lawyer had come to pick her up at Chhatrapati Shivaji Maharaj International Airport and later was driving the car to go home to their 12-year-old son Rohit.

Eyewitnesses said that as the car was zooming past the Shahapur village, Vijay Mali suddenly lost control and rammed into a stationary gas tanker parked beside the highway.

Geeta, sitting in the passenger seat, was seriously injured and rushed to the Shahapur Civil Hospital nearby, but declared dead on admission while Vijay Mali is admitted in a critical condition.

Soon after she landed at the CSMIA, she clicked and posted a selfie with Vijay expressing her joy at returning home after a very long time.

Earlier, she posted selfies clicked at Amsterdam Airport commenting how the Dutch city was almost ready for Christmas and it was a wonderful experience just hanging around.

Among the upcoming young singers, Geeta had sung songs in Marathi and Hindi and has last professional performance was at a mega-musical nite at the International Film Festival in New York.

Hailing from Nashik, she completed her Masters in Indian Classical Music from University of Mumbai and was the owner of a musical band, ‘Geet Ganga’.  (Agency)