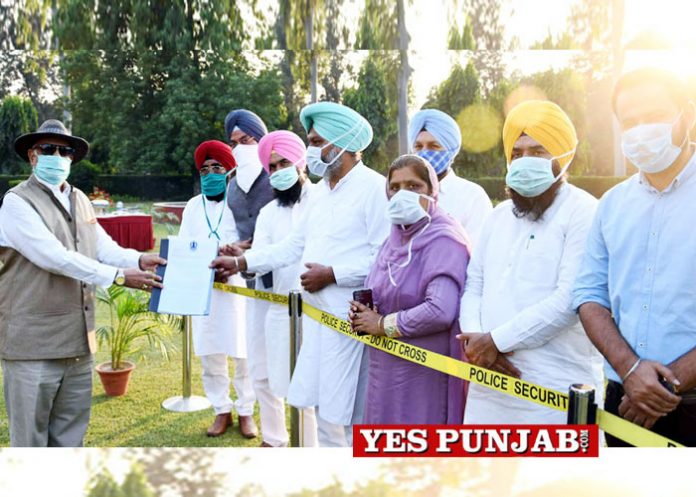 Chandigarh, October 30, 2020 (Yes Punjab News)
A delegation of the Aam Aadmi Party (AAP) led by party’s senior leader and Leader of Opposition, Harpal Singh Cheema and state youth wing president and MLA Meet Hayer and handed over a memorandum seeking immediate withdrawal of the Ordinance on air pollution passed by the Union Ministry of Law and Justice on 28 October 2020.

The delegation described both the decisions of the government at the Centre as premature and unilateral, heaped on the farmers when they were waging a big battle fighting back the three draconian farm laws of the government. The delegates said that, besides being an affront to the country’s federal structure, the laws were a brazen attempt on the part of the Centre to meddle in the affairs of the state.

The delegation said the lopsided move to implement these contentious laws at this crucial time would adversely affect not only state’s economy, but also its industry, rural development, besides robbing the Punjab’s farmers of their legitimate rights.

The memorandum said the Aam Aadmi Party was a strong votary of clean governance and clean-green environment, saying the Arvind Kejriwal-led Delhi government had taken several landmark decision in this regard to create a clean green environment in the pollution-ridden capital. It was conducting trials for a scientific and efficient disposal of straw.

The AAP delegation said that, instead of cracking a whip on the farmers for the pollution caused by the burning of straw, besides initiating legal proceedings against them, the Central and State Governments should provide scientific and economic solutions to the disposal of straw, saying they were forced to burn straw under duress.

The delegation apprised the governor that the neither the state nor Union governments had done a precious little to address the challenges being faced by the farmer due to the straw burning, adding that they had evinced no keenness in the farmer-friendly decisions taken by the National Green Tribunal (NGT) and the Courts since 2015 to address the problem.

The delegation pointed out that the farmer was being portrayed as the villain behind the straw burning issue, and sword of the law ever hanging over his head, which was an affront to the ‘Anaadata’.

The memorandum reiterated that better would have been if the government had ensured a bonus worth Rs 6 to 7 thousands or per acre compensation to meet the expenses on burning straw borne by the farmers, saying the government had ignored the recommendation of the Board of Directors to, instead of demolishing the Guru Nanak Dev Thermal Plant, it would have been run on straw.

The delegations expressed its disenchantment over the withholding of the RDF to Punjab by the Central Government, which was a gross injustice besides being an interference in internal affairs of Punjab, besides being an assault on the federal structure, stating the decision of the government was revengeful and detrimental to the interest of Punjab. It demanded immediate release of the RDF.

The delegation also demanded the Punjab government should immediately issue a white paper on the allegations of misuse of RDF.