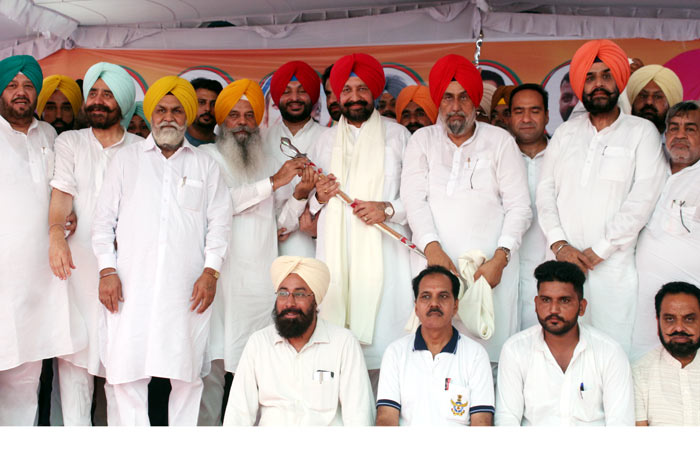 Cabinet Minister for Health and Family Welfare Mr Balbir Singh Sidhu today said that due to the developmental works of Capt Amarinder Singh led Punjab government in last two and half years tenure, that the Shiromani Akali Dal (SAD) has now been reduced to an issueless party.

He said that sadly, the SAD leaders are clueless as to which issue to raise in the upcoming by-elections because they do not have any issue against the present Punjab government. He said this while addressing a massive gathering on the occasion of Chhapar Mela, near here today.

While speaking on the occasion, Mr Balbir Singh Sidhu said that earlier, Punjab government had a debt of around Rs 40,000 crore, but due to mismanagement and poor policies of the previous SAD-Bharatiya Janta Party government in the state, that this debt became Rs 2.25 lakh crore when Capt Amarinder Singh led Congress party formed government in Punjab.

He said that it was due to the farsightedness of Chief Minister Capt Amarinder Singh that the fiscal health of the government is slowly improving and that is why, all election promises are fulfilled.

He informed that immediately after forming government in the state, Capt Amarinder Singh waived off loan of farmers, sincere efforts were made to ensure that the menace of drugs is checked completely. He said that the Punjab government ensured that the youth stay away from drugs and are provided employment.

He said that Sarbat Health Insurance Scheme has been started by the state government for the betterment of its residents and 70- 80% residents have been covered under it. Besides this, special emphasis is given towards strengthening our education and infrastructure.

Mr Balbir Singh Sidhu said that the Capt Amarinder Singh led government is committed to fulfil all their poll promises, due to which the SAD does not have any issue to take to the masses for upcoming by-elections. He said that the SAD has literally turned into a private limited company, rather than a party which is concerned for Punjabis. He accused former MLA Mr HS Phoolka for poor development in Dakha constituency.

While taking an aim at the Narendra Modi led Union government, Mr Sidhu said that due to their anti-people policies, our country is slowly becoming slave of industrial houses on economic front. He said that Narendra Modi is one of the worst Prime Minister’s our country ever had because till date, they have failed to redress any of the problem’s being faced by Punjab.

On this occasion, he also announced to upgrade the Medical Sub Centre of village Chhapar into a Primary Health Centre and assured that it would become operational in next couple of months time.

Ludhiana MP Mr Ravneet Singh Bittu said that both the SAD as well as RSS never want that the perpetrators of desecration of religious granths are punished. That is why, the previous SAD-BJP government had transferred this case to CBI. He called upon the Congress leaders and workers to join hands to ensure a comfortable victory for the Congress nominee in upcoming Dakha by-election.

Mr Bittu said that it was on the behest of a BJP Member of Parliament that the sacred Ravidas Mandir in Tughlakabad (Delhi) was demolished by Delhi Development Authority (DDA). He assured that the Congress party would ensure that this mandir is rebuilt on the same place and dedicated to the community. He also informed that the work on Kartarpur Sahib Corridor is going on war-footing and the Punjab government would ensure that maximum number of devotees pay obeisance there.

Fatehgarh Sahib MP Dr Amar Singh said that the Narendra Modi led Union government is trying all tactics for failure of Punjab government. He informed that the union government has reduced its budget for Punjab to a large extent. He accused the SAD of indulging into just vote politics and stated that the Akali MP’s have never raised issues to Punjabis in the parliament.