Home Punjab Majithia demands sack & arrest of Ashu and impartial inquiry into UP... 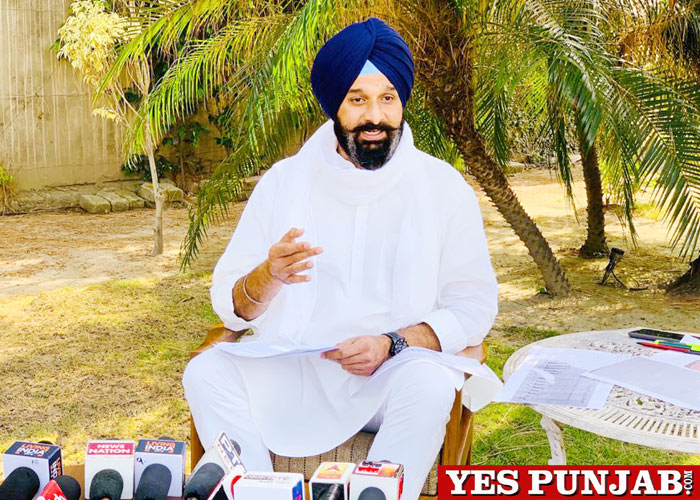 Former minister Bikram Singh Majithia today said chief minister Capt Amarinder Singh had deceived Punjabis by stating the Shiromani Akali Dal (SAD) took an about turn on its stand in the Vidhan Sabha, by releasing copies of his assembly speech as well as asking the chief minister to tell why he had refused to take three crore Punjabis into confidence before passing Bills vis a vis the central agri marketing laws.

Addressing a press conference here, Mr Bikram Majithia said the chief minister spoke outright lies in the same manner in which he took false oaths in the name of the Dasam Pitah, because he had entered into a deal with the centre to pass Bills which would not help the cause of Punjab and Punjabis and only help him to mislead farmers and get their ‘rail roko’ agitation lifted.

Putting his speech in public domain, Mr Majithia read out portions which made it clear that he had forcefully asked for incorporation of suggestions of the SAD legislature party into the Bills moved by the chief minister.“

I made it clear that it was the supreme sacrifice of farmers agitating against the central black laws had forced the government to hold a special session after the chief minister rejected the proposal outrightly.

It is because of this that I mentioned in my speech that an opportunity had been lost and now we might have to take up this matter again after three months”.

The SAD leader said he had also made it clear in his speech that the proposed Bills needed gubernatorial and Presidential sanction which might not come about. “The chief minister interrupted my speech to admit the sanction may not be given proving he knew all along that he was taking steps which would not address the grievances of the farming community.

The CM also announced in a self defeatist move that the government had formed a five member panel of lawyers to take up the case in the apex court”. Mr Majithia said it was only when all recourses were exhausted and the Punjab government refused to entertain suggestions made by the SAD including addressing the need for assured government purchase of all food crops on msp, making the entire State a single ‘mandi’ (principal market yard) and repealing the amended APMC Act of 2017 that the SAD expressed solidarity with the farmers’ cause by voting in favour of the Bills.

He said as per the disclosures made by the PUNSUP DM which were in public domain, the scope of the scam was as much as Rs 80 crore. He said DM Praveen Jain had asserted that a bribe of Rs 1.45 per bag was being sought from ‘arhatiyas’ to adjust paddy being smuggled into the State from Uttar Pradesh at much lesser cost. He said the officer had also admitted that the corruption was being done to hold programmes of ‘Pappu’ Rahul Gandhi in Punjab.

He said in case a free and fair inquiry was not conducted and the corrupt were not punished, Punjabi farmers would suffer. “Once the CCL limit is consumed farmer produce in Punjab will not be purchased by government agencies”.