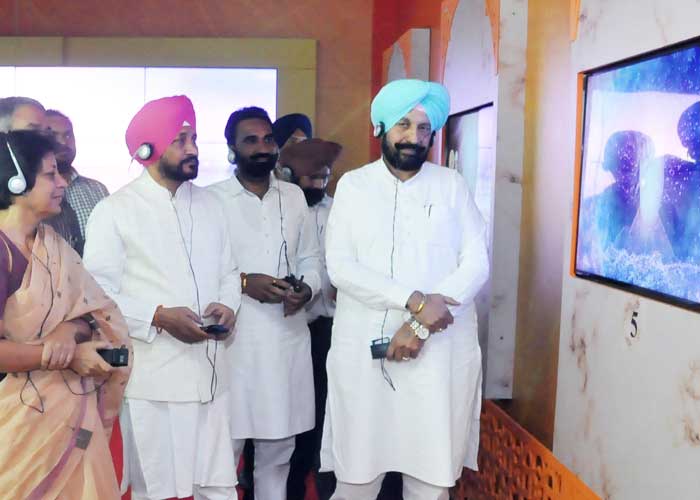 Launching the 4-month elaborate schedule of soulful and mesmerizing events including immersive Light and Sound Show, first presentation of which was attended by both the ministers underlines Guru Sahib’s tenets of religious tolerance and assimilation which are the only recourse for humanity to ensure a prosperous future.

The captivating lyrical presentation woven around rich tapestry of events would echo the message of Sri Guru Nanak Dev Ji across the length and breadth of state covering 26 locations including all district headquarters, three historic towns of Sultanpur Lodhi, Dera Baba Nanak and Batala including Chandigarh.

Terming it as laudable endeavour involving technology to further disseminate the teachings of Guru Sahib, the ministers urged for imbibing the philosophy of universal acceptance and assimilation of cultures in the present polarized atmosphere.

The carefully designed set of programmes were imbued with Guru Sahib’s concern for water, air and land conservation in line with his philosophy, the ministers noted while announcing that first of its kind floating multimedia light and sound shows which would also be organized on banks of river Sutlej and Beas covering 16 locations beginning October 17 until the end of November this year.

Mr. Channi said that path shown by Guru Sahib in liberating society entangled in orthodoxy would always remain a benchmark for the humanity in its fight against social ills. He also urged all the leaders of different political parties to rise above the party lines and celebrate the spiritual function on one platform with fervour.

Mr. Balbir Singh Sidhu said that the Punjab Chief Minster Captain Amarinder Singh is personally monitoring the 550th Prakash Purb celebrations, which are being held across the state. He said that it is an honour to be blessed to witness this sacred occasion in our lifetime and the occasion would be celebrated in a grand fashion.

An array of technological advancements involving Large Format Display screens, RFID headphones and cutting edge technology would provide soulful experience to devotees visiting the digital museum, which would remain open from 6:30 AM until 6:00 PM daily at different locations across the state beginning from Mohali and culminating at Amritsar on 10th of February, 2020.

As the message of social equality and universal love propounded by Sri Guru Nanak Dev Ji engulfed the still night, there was an aura of gratitude, peace and tranquility with many a moist eye amongst the audience.

Both the ministers appreciated the efforts of senior officers of the government of Punjab, who burnt midnight oil to make this event a great success.