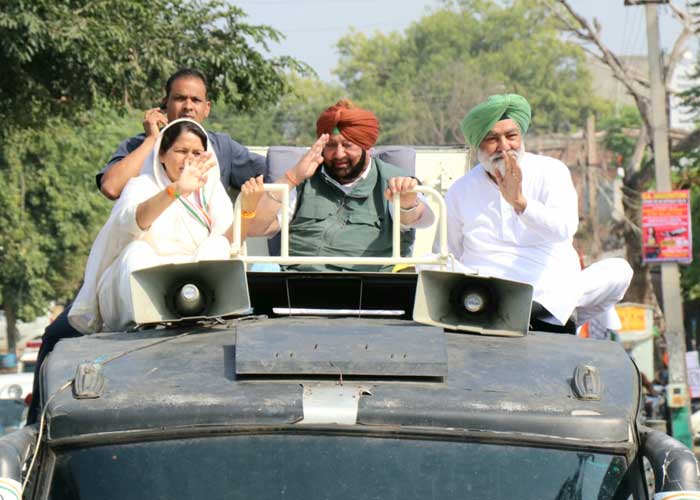 Promising to nurture the Mukerian assembly segment as his own, Punjab Chief Minister Captain Amarinder Singh on Saturday concluded the electioneering for Monday’s bypoll here with total confidence of a clear Congress victory in all four constituencies, trashing Akali chief Sukhbir Badal’s charges of no development in Punjab under the current regime.

During a Mukerian-wide roadshow, the Chief Minister ridicules Sukhbir’s statement that he (Captain Amarinder) was not accessible to the people, and pointed to the surging crowds to counter the Akali leader’s claims that his roadshows had received poor public response. “Sukhbir is either blind or is doing an ostrich act to avoid facing the harsh reality that the people have rejected him and his party,” said Captain Amarinder.

The entire Akali leadership is a spent force, and now they have nothing but lies to give to the people, the Chief Minister asserted

Captain Amarinder assured the people that he would take care of the constituency as his own, and take forward the vision charted by ex-MLA Rajnish Kumar Babbi, who had passed way after a prolonged illness. Babbi’s wife and current Congress candidate Indu Bala will translate all the promises made by him to the people of Mukerian, said the Chief Minister.

Describing Mukerian as a constituency of Congress stalwarts, Captain Amarinder recalled the development work done by seven-time MLA Dr Kewal Krishan, who had also served as a minister and a Speaker during his previous term as chief minister. The same level of development will be ensured once again by Indu Bala, with the full backing of his government, said the Chief Minister.

Confident of a clean sweep in all the four assembly segments headed for voting on Monday, Captain Amarinder said while victory and defeat was a way of politics, the mood was clearly in favour of the Congress.

He rejected the suggestion that Dakha and Jalalabad were `hot’ seats, saying he did not see them as unique segments in any way, and did not perceive either the BJP or SAD to be a strong opponent in these constituencies or in Phagwara and Mukerian.

Captain Amarinder, who has been campaigning in all these seats for the past five days, said he strongly believed that all the four seats were set for a Congress win, with no other party standing a chance.

The development work done by his government in the past two and a half months speaks for itself, he said, asserting that the people wanted progress, which they had discovered that no other party except Congress could deliver in Punjab.