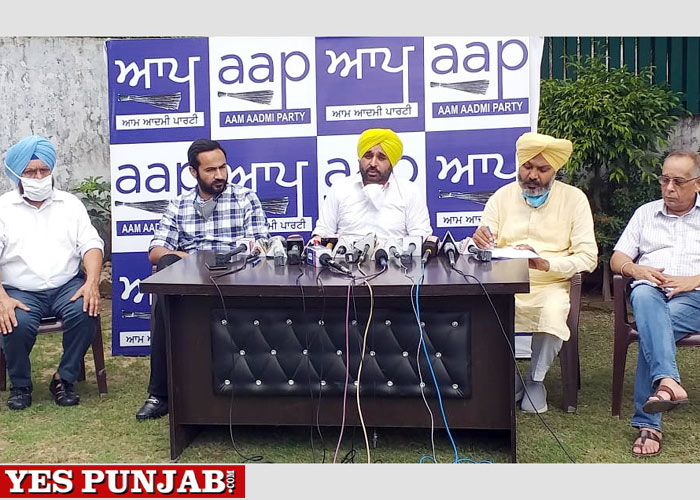 Aam Aadmi Party (AAP) state President and Member of Parliament (MP) Bhagwant Mann said that the Narendra Modi government at the Centre was hell bent on ruining the farmers of Punjab and Haryana by bringing in the anti-farmers ordinances, saying both the Badals and Capt Amarinder were responsible for the disastrous decisions to demolish the world’s best marketing model in both the states and abolishing the Minimum Support Price (MSP) for wheat and paddy crops, holding the Captain government equally responsible.

Bhagwant Mann, while interacting with the media in the capital here on Saturday, lashed out at the Badal family, Capt Amarinder Singh and the Narendra Modi government at the Centre for their anti-farmer stance.

Terming the ordinances on agriculture reform brought in by the Modi government, as an attempt to demolish the country’s federal structure, Bhagwant Mann said that Badal ‘bahu’ Bibi Harsimrat Kaur Badal, was conspicuous by her presence at the cabinet meet when the rights of farming fraternity of Punjab and Haryana were being robbed off.

He said that just to save the ministerial berth of Badal ‘bahu’, the family allegedly struck a deal with the Modi government to commit a ‘heist’ on the rights and interests of the farmers of Punjab and Haryana.

The AAP MP said that by abolishing MSP and the existing world class marketing system, being handed down to the Adanis and Ambanis, was a well thought-out design to enslave the farmers and farm laborers under the guise of cluster farming, which would eliminate more than 30,000 ‘arhtiyas’ in the state and millions of others, including, book keepers, ‘paledars’, drivers and transporters, who would be rendered jobless, adding that as many as 1434 procurement centres would shut down and the state exchequer would suffer a loss of over a whopping Rs 12,000 crore annually.

Bhagwant Mann said that now Capt. Amarinder Singh, who was shedding crocodile tears on the Centre’s ordinances now, should explain to the people of Punjab, as to why he did not oppose these deadly proposals being discussed or debated by the Union Government before giving them a final nod. He said the people of Punjab would never erase from their memory the dubious and disastrous role played out by both the Congress, Akali Dal (Badal) and BJP, who were equally responsible for the sorry state of affairs.

Castigating Capt. Amarinder Singh on the issue of seed scam and his alleged complicity with liquor mafia, Mann questioned as to how it was allowed to happen when the Chief Minister was heading both departments himself. Batting for an impartial probe into both the scams by sitting judges under watch of the High Court, Mann wondered as to how cabinet minister Sarkaria, considered to be close to Captain, would hold free and fair investigating against his boss.

Replying to a question on Congress leader Navjot Singh Sidhu’s joining the AAP after a long political sabbatical, Bhagwant Mann made it clear that if anyone wanted to join the party unconditionally by sacrificing his personal interests and aspirations, would be accorded a rousing welcome in the party fold.

Asked about the requisition of services of iconic poll strategist Prashant Kishor for the state unit of the party in the elections in Punjab, Bhagwant Mann said: “By far there has been no proposal received by us in this regard nor by the party high command”