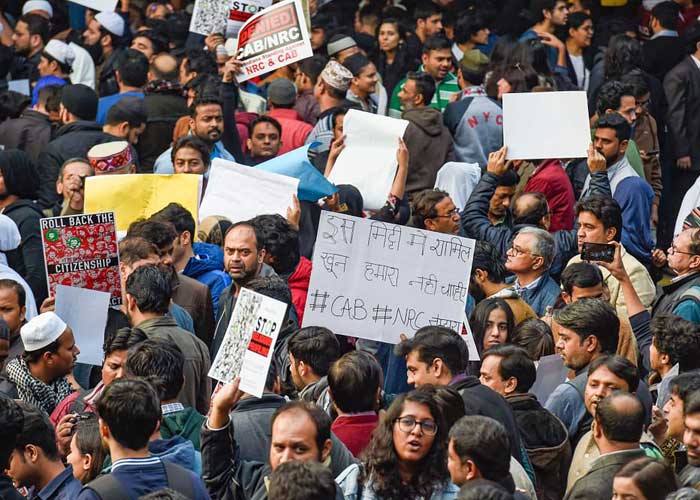 Anti-CAA protesters in the capital here plan to give a big boost to the stir on January 30, when students from different universities from across the nation will converge at the Rajghat to form the “Satyagrah human chain”.

Sharing posters and an invite, the members of ‘Young India against CAA-NRC-NPR’ campaign called for a “fight against the Godses of past, present and future”.

The protest has been called under a joint initiative by over 60 students’ union from across the country, and includes students’ union of universities like AIIMS, Aligrah Muslim University, JNU among its members.

Explaining the significance of the protest, N. Sai Balaji, former JNUSU president and leader of the campaign told IANS: “On 30th of January we as part of Young India will make sure that democracy remains intact in the country and acts like CAA and NRC are not implemented.

“It will highlight and safeguard the right to equality in the country.”

“The government pretends to follow the Mahatma’s values. But actually it follows Godse. We aim to show that we are the one who actually follow Gandhi. Jamia was founded by Gandhi. We will take back Gandhi from them,” Safoora, a member of Jamia Coordination Committee told IANS.

Marking the death anniversary of the original Satyagrahi Mahatma Gandhi, the Jamia Coordination Committee (JCC) has also called for a long march from Jamia to Rajghat against CAA.

The JCC also plans to talk to protesters at other sit-ins here like Shaheen Bagh and Khajuri Khas to march from their spot to the Rajghat against the recently passed Citizenship Amendment Act.

January 30 is the day when Mahatma Gandhi was gunned down by Nathuram Godse and the day is known as Shaheed Diwas or Martyrs’ Day.

The anti-CAA protestors’ now aim to stage protest on the day throughout the country.  (Agency)