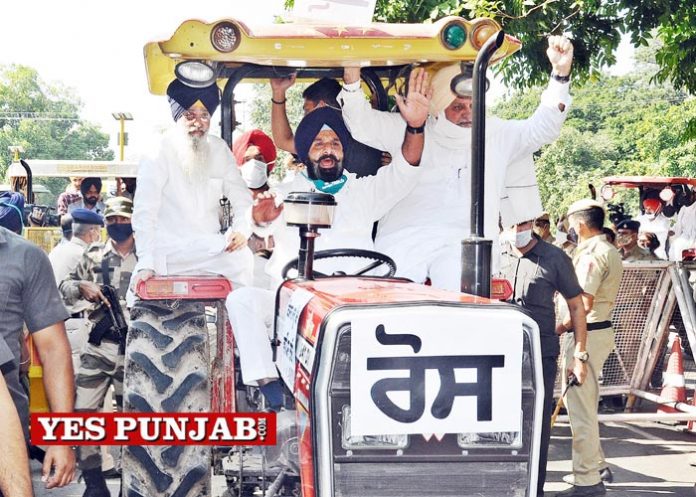 Chandigarh, October 19, 2020 (Yes Punjab News)
The Shiromani Akali Dal (SAD) today registered a formal protest for non-supply of proposed legislation set to be introduced in the Vidhan Sabha tomorrow to members with Speaker Rana K P Singh besides asking him to take action against those responsible for not allowing SAD members to interact with the media at Punjab Bhawan.

The SAD legislature party earlier held a four hour sit in dharna outside the gates of Punjab Bhawan after they were not allowed inside to interact with the media which had been asked to cover the Vidhan Sabha proceedings while stationed there.

Party legislators had also conducted a tractor march to the Vidhan Sabha in the morning in solidarity with farmers. They asserted that the proposed Bills were not being made public with three crore Punjabis because they were being finalised as per directions of the Modi government.

“The Congress Government is gearing up to betray Punjabis as it did in the case of the river waters termination Act in 2004 which allowed continuous flow of river waters to Haryana and Rajasthan”.

The SAD legislature party members, who met the Speaker today evening under the leadership of Sharanjit Singh Dhillon, also apprised him that three ministers today held meetings with farmer organisations in contravention of his orders and later escaped from the Bhawan by crossing over the barbed wire fencing rather than face protesting SAD legislators at the main gate.

The Speaker admitted in front of newsmen that he had denied permission for the meeting between ministers and farmer representatives at the Punjab Bhawan last night because the Punjab Bhawan had been declared a precinct of the Vidhan Sabha.

He admitted on record that the ministers should not have held any meeting with farmer organisations at the Punjab Bhawan after he had passed orders in this direction. He also told the SAD legislators that they should not have been stopped from interacting with the media and assured them he would take appropriate action in the matter.

Meanwhile Mr Bikram Singh Majithia also told the Speaker that his office had been undermined by the Congress legislature party which arbitrarily announced extension of the Vidhan Sabha session even though this is the prerogative of the Business Advisory Committee.

He also condemned the Congress Government for not sharing the Bills it proposed to introduce in the House tomorrow with the members, saying this amounted to murder of democracy. He also called for lifting of the censorship imposed on the media and the opposition with regard to the premises of the Vidhan Sabha, including the Punjab Bhawan.