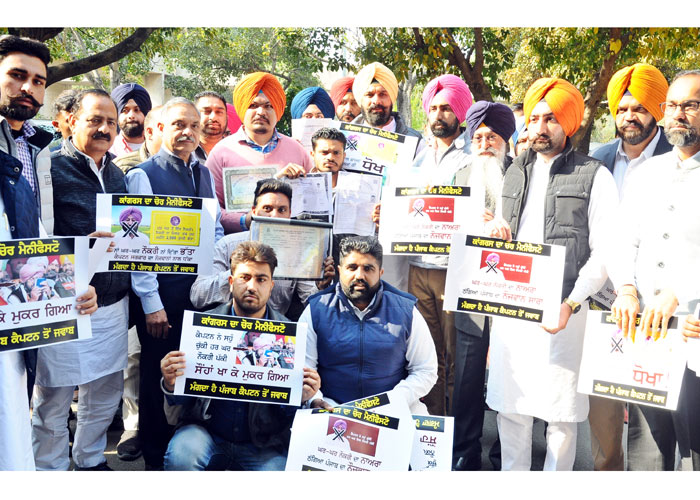 The Shiromani Akali Dal (SAD) today said chief minister Capt Amarinder Singh had misled the Vidhan Sabha and defrauded Punjabis by claiming the Congress government had given 57,000 government jobs to youth, when the actual number of government jobs given in the last three years was only 33,000.

Addressing media persons in the Vidhan Sabha media gallery SAD legislative party leader Sharanjit Singh Dhillon and former minister Bikram Singh Majithia said the government tabled an answer in the house stating that it had given only 33,000 government jobs in the last three years besides disclosing that it had recruited 24,000 contractual employees whose services could be dispensed with at any time. “This is the truth of the much hyped 12 lakh job claim of the chief minister which has fizzled down to only 33,000 jobs being given under the ghar ghar naukari yojna”.

Mr Dhillon and Mr Majithia said the CM had even washed his hands of the responsibility to provide smart phones to youth by raising the bogey of Carona virus. “The government has been postponing distribution of mobile phones on one pretext or another but now it had tried to scare away youth asking for mobile phones by stating that they might come infected with Carona virus and has dropped the scheme”.

Speaking about the chief minister’s reply on the debate on the Governor’s address, the SAD leaders said Capt Amarinder had inflated his government’s supposed achievements to such an extent that even Congress legislators realized it was all a ‘gup’ (joke) and they did not even bother to thump their desks in approval.

They said the very fact that the CM was talking about things which existed only on paper like the Buddy and DAPO schemes made it clear that Capt Amarinder was an Idle CM and nowhere near the Ideal CM he wanted to project himself as by getting such an award from Delhi instead of the people of Punjab.

Mr Dhillon and Mr Majithia said the chief minister had pulled the figure of Rs 50,000 crore investment done in the State in the last three years from thin air. “If there was a single investment done in the State the CM would have inaugurated the project. We have not seen the CM inaugurating even one project which fructified due to the Congress government’s efforts”, he added.

The SAD leaders said the decision to given importance to English by introducing it in 6,000 schools was not in the interest of the mother tongue – Punjabi. They said this would marginalize Punjabi and said it should be put on hold. They said it was unfortunate that the CM did not speak about agriculture, crop diversification or efforts made to conserve ground water. The leaders said it was unfortunate that no road map had been drawn to release crop compensation due to farmers since one year besides Rs 700 to Rs 800 crore dues of sugarcane growers. EOM