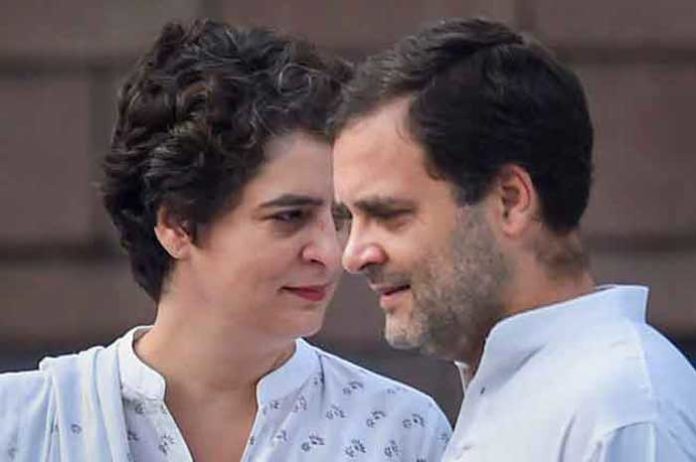 The Congress in Uttar Pradesh is gradually turning into a battleground for Rahul Gandhi’s loyalists and his sister Priyanka’s supporters.

What began as a covert standoff, is now turning into an open battle.

“It all began in October last year when Ajay Kumar Lallu was appointed UPCC president and he arrived in Lucknow to take charge. The UPCC office reverberated with ‘Sonia Gandhi zindabad’, ‘Priyanka zindabad’ and ‘Ajay Kumar zindabad’ but no one said ‘Rahul Gandhi zindabad’. The speakers at the function also avoided mentioning the name of Rahul Gandhi. That was the day we realised that this Congress had turned into Priyanka Congress,” said a veteran leader.

According to insiders in the UP Congress, all Rahul loyalists in the party have been completely sidelined.

“There is no room for us in the present dispensation where Priyanka’s men – including her personal secretary Sandeep Singh and UPCC president Ajay Kumar Lallu – call the shots. Priyanka meets only those partymen whose names are cleared by these two and we cannot even get our views across to the party leadership,” the leader said.

An example of this are the 10 senior Congress leaders who were expelled in November last year for ‘anti-party activities’.

Expelled party leader and former MLC, Haji Siraj Mehdi, said, “Some of us had decided to meet on Nehru Jayanti on November 14 and pay our tributes to the nation’s first Prime Minister because we had not been informed or invited to the function at UPCC. Four days after the meeting, we learnt that we had been expelled. We sent letters to the Congress President, seeking an appointment, but got no response. It is clear that the Congress President does not wish to interfere in UP matters.”

According to Rahul loyalists, they have made several attempts to convey their feelings to Rahul Gandhi but he also has maintained a stoic silence on the matter.

“We understand that the family does not wish to interfere in each other’s domain but they should also realise that it is the party that is going to bits. Priyanka’s advisors are responsible for the gaffes on the bus controversy and her tweets that gave the Yogi government an opportunity to lash out at the Congress,” said a former UPCC president.

Party leaders admit that since the past one year, all veteran leaders – from Salman Khurshid to R.P.N. Singh to Nirmal Khatri, Rajesh Mishra, Shri Prakash Jaiswal, Arun Kumar Munna and Raj Babbar have maintained a safe distance from the party since Lallu took over in 2019.

Jitin Prasada, on the other hand, is busy with his own outfit, the Brahmin Chetna Parishad, and is charting his own course in Brahmin politics.

Nadeem Ashraf Jaisi, a senior party leader from Rae Bareli, who quit the Congress to join Aam Aadmi Party a few months ago, said, “Those who have worked with Rahul Gandhi are now being sidelined and ignored. If someone like Chaudhary Zile Singh (Noida) who has worked with late Rajiv Gandhi, is forced to quit the Congress, those at the helm of affairs should do some introspection.”

Rae Bareli, incidentally, has been worst hit in the Priyanka era. Two Congress MLAs, Aditi Singh and Rakesh Singh, have revolted against the party and the Congress petition seeking their disqualification has also been rejected by the Speaker.

Rae Bareli, now, does not have even a single Congress legislator even though it is the parliamentary constituency of interim Congress chief Sonia Gandhi.

Another veteran leader, who did not wish to be named, said, “Priyanka Gandhi’s problem is that she has implicit trust in those who have come in from outfits like AISA and Rihai Manch. These people lack political decorum and dignity and are not even well acquainted with the Congress ideology. They can make noise but not an impact.”

He said that in the past few months, the party leadership has expelled leaders from the party, shrinking its own base.

Former Congress MP, Santosh Singh — one of those expelled from the party– said that apart from pushing out dedicated party workers, the party was now ‘importing’ youth from other parties and Leftist outfits like AISA and Rihai Manch.

“Priyanka should learn to recognise Congress leaders and develop leadership from within the party instead of importing leaders for outside. If this trend continues, the Congress may not win even a single seat in the next Assembly elections,” he said.  (Agency)