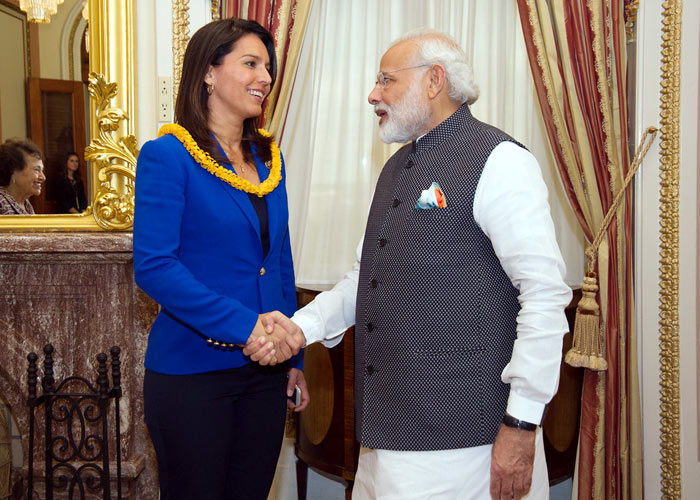 An anonymous source within Tulsi Gabbard’s 2020 presidential campaign has confirmed to Organization for Minorities of India that — despite widespread reportage by Indian media that she will attend — the US congresswoman has refused an invitation to join Indian Prime Minister Narendra Modi’s September 22 pep rally in Houston, Texas.

Gabbard’s decision to drop out of the event, dubbed “Howdy Modi,” follows on the heels of Congressman Ro Khanna’s statement, issued last month, that “it’s the duty of every American politician of Hindu faith to stand for pluralism, reject Hindutva, and speak for equal rights for Hindus, Muslims, Sikhs, Buddhists, and Christians.” Her action marks a significant change in engagement with India’s controversial premier considering she has previously met with him on four occasions.

“Khanna’s statement was immediately recognized by South Asian politicos as a seismic shift in Indo-centric politics,” wrote Amar Shergill on September 3. An attorney who serves as an executive board member of the California Democratic Party, Shergill continued, “He is the highest ranking American elected official of Indian origin, with a deep understanding of and connection to South Asian politics, and, yet, he stated in decisive moral terms that the dominant political ideology of India must be rejected as a matter of fundamental human rights.”

Hindutva, defined by the United States Commission on International Religious Freedom as an ideology that treats non-Hindus as foreign to India, is the guiding philosophy of India’s ruling Bharatiya Janata Party. The BJP’s Modi, who campaigned as a Hindu nationalist, stated in 2013, “My identity is of a Hindutvawadi [follower of Hindutva].”

VD Savarkar, who popularized Hindutva as a religious nationalist political ideology in his 1923 book of the same name, stated, “India must be a Hindu land, reserved for the Hindus.”

In 2014, Gabbard appeared at events celebrating Modi’s election, even wearing scarves bearing the BJP logo. Later, at their first meeting, Gabbard gifted Modi her childhood copy of the Bhagavad Gita on which she had taken the oath of office. In 2016, she called Modi “a leader whose example and dedication to the people he serves should be an inspiration to elected official everywhere.”

Since 2018, the Hawaiian congresswoman has faced repeated protest for her long-term association with American Hindutva groups, particularly the Overseas Friends of the BJP and the Hindu Swayamsevak Sangh.

HSS is the international wing of the Rashtriya Swayamsevak Sangh, a paramilitary founded on Savarkar’s Hindutva ideology and inspired by fascist movements in Europe. Gabbard’s oldest and most faithful donors include HSS Vice-President Ramesh Bhutada of Houston, who joined BJP (and former RSS) spokesperson Ram Madhav at her 2015 wedding in Hawaii. Bhutada, as reported by a recent profile of Gabbard, worked from Texas to help elect Modi in India. He reportedly organized a phone bank of 700 volunteers and described US-based preparations for supporting Modi’s campaign as “almost like that for an Indian wedding.” He later called Modi’s election “a second independence for India.”

Several of Gabbard’s other Houston-based donors, such as Bhutada’s relative and business associate Vijay Pallod, traveled to India to campaign for the BJP.

“This is the second time I’ve seen Tulsi drop out of an RSS-sponsored event at the very last minute,” says Jada Bernard, an activist who has protested Gabbard on the presidential campaign trail. In September 2018, Bernard explains, Gabbard announced her withdrawal from the World Hindu Congress in Chicago just three days before the event began.

“Tulsi only withdrew after months of fierce protests by Indian minorities and her own constituents.” he adds. “Because the RSS chief was the keynote speaker, several other Hindu politicians also backed out. We’re seeing Hindus around the world speaking out against Hindutva and reject it as an embarrassment to their religion.”

“As the American public grows more knowledgeable about the violence and hate produced by Hindutva, Congresswoman Gabbard has faced increasing pressure to disassociate from groups that embrace this supremacist ideology,” remarks OFMI’s Arvin Valmuci. “As Modi’s regime has done nothing except fuel the rise of the RSS and its vicious atrocities against India’s Dalits, Sikhs, Christians, and Muslims, we are encouraged to see Hindu politicians like Ro Khanna and Tulsi Gabbard rejecting association with him.

We call on all other American politicians of every background to follow their lead and abandon their support for Modi and his agenda of supremacy.”

Balbir Singh Dhillon, president of West Sacramento Sikh Gurdwara, says he wants more congressional representatives to speak out against Modi. “This is such a risky situation that Modi has created in South Asia,” comments Dhillon. “Look at how his policy in Kashmir has caused tension between these three nuclear-armed powers: China, Pakistan, India. Standing up against Hindu nationalism is a matter of grave concern for American foreign policy.”