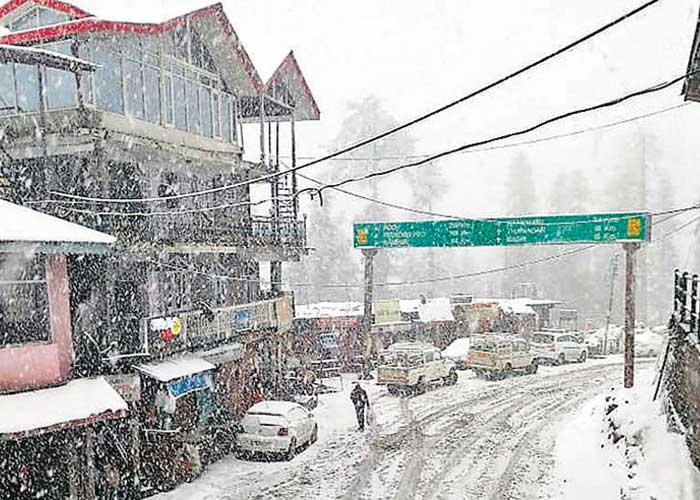 The weekend rush of tourists to enjoy the snowy landscape, coupled with slippery roads and lack of traffic management in picturesque tourist resorts, mainly Shimla and Manali in Himachal Pradesh, have brought them to a halt, literally.

The result: Long traffic jams adding to the problems of the commuters.

For the third consecutive day, tourist spots beyond Shimla like Kufri and Narkanda have been out of bounds owing to all major roads being under a thick blanket of snow.

So was Manali where all the prominent tourist destinations towards the Solang ski slopes have been closed to traffic. Road connectivity to Manali was restored fully on Friday.

Officials said work is on to resume the traffic after clearing the snow piled on the roads but it will take a day or two for normalcy to return.

As per the State Disaster Management Authority, more than 800 link roads, comprising nearly 600 in Shimla region alone, are blocked.

The government advised motorists to check weather conditions before they venture out on the high hills as chances of snapping of road links are still high.

Shimla and its nearby spots like Kufri and Narkanda and the popular tourist resorts of Manali and Dalhousie are still covered in a thick blanket of snow.

“It took 10 hours to cover 65 kms between Narkanda and Shimla due to lack of traffic management and slippery road conditions,” Akshay Sood, a resident of Shimla, told.

He blamed tourists for irresponsible driving and traffic snarls.

Sood along with his family was stuck in Narkanda for the past three days after closure of road links due to snowfall.

“I was charged Rs 900 by a porter for carrying my luggage from my hotel to the car parking that was just 500 metres away. There is no mechanism to regulate them. They are robbing the tourists,” Abhay Singh, a tourist, said in Shimla.

Officials said roads in the higher reaches of Kinnaur, Shimla, Chamba, Mandi, Kullu and Sirmaur districts were severely hit by heavy snowfall and work was on to reopen them.

In the state capital and tourist resorts like Manali and Dalhousie, internal roads were too slippery for traffic as these were laden with snow. Even walking in the streets was risky.

Although the Shimla Municipal Corporation has cleared the snow on Cart Road and some VIP roads, most of the other roads have not been cleared yet.

Due to the slippery condition of roads and pathways in Shimla, many pedestrians, most of them tourists, were getting injured. Two Shimla residents died after slipping from snow-laden pathways.

Tourists have been facing much difficulty in Shimla and Manali as most of the parking lots are slippery and covered with a good quantity of snow.

The Himachal Pradesh Road Transport Corporation (HRTC) has been operating buses for Rohru and Chopal areas in Shimla district via Rajgarh in Sirmaur district.

Officials said vehicular traffic on the Shimla-Theog-Rohru road via Kharapathar, the shortest route, remained suspended for the fourth day as a thick layer of snow covered the road.

Buses from Shimla town to Rampur and Kinnaur district were plying via Dhami.

A day earlier, Chief Minister Jai Ram Thakur, who reviewed the situation, directed authorities to ensure that all essential services are restored in the areas affected due to heavy snowfall.

Sixty six people, including sick, old and pregnant women, were airlifted from Lahaul-Spiti to Kullu.

The Met Office here has forecast more snowfall across the state from January 12, with chances of a heavy spell a day later.  (Agency)