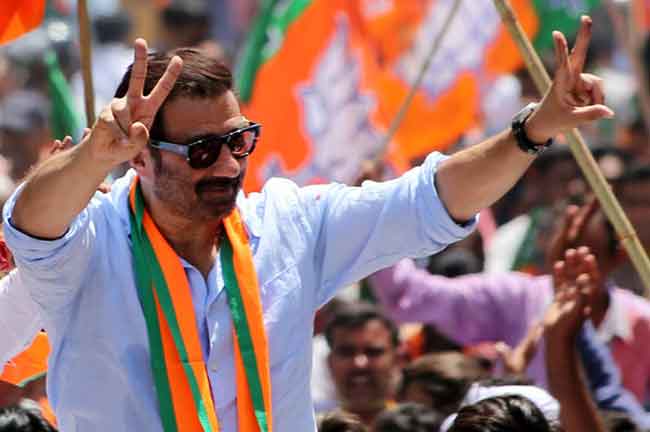 Amid blistering heat, a sea of people thronged actor-turned-politician Sunny Deol’s roadshows vying for a selfie with their favourite candidate. True to star gesture, the Gadar star is also not missing an opportunity to get off from his vehicle to meet children.

The BJP-Akali Dal has fielded the 62-year-old from Gurdaspur, the seat represented four times by yesteryear actor Vinod Khanna, who died in April 2017 due to cancer.

Khanna, a native of Punjab, was a sitting MP at that time of his death.

Son of veteran actor Dharmendra, Deol, who does not have any direct connection with Gurdaspur city — though his father hails from Sahnewal town near Punjab’s industrial town Ludhiana, has a strong Punjabi appeal. He is a Jat Sikh.

Deol, whose main priority is creating employment for the youth, entered the Hindi film industry with “Betaab” in 1983 and his best hits include “Border”, “Damini” and “Gadar: Ek Prem Katha”.

One of his fans handed him a hand-pump at a roadshow, a scene in his 2001 blockbuster movie “Gadar…” in which Deol uproots a similar pump to fight off a crowd, who were trying to attack a woman.

Deol is unfazed by the criticism and despite being dubbed an “outsider” by the Congress, the actor says: “I’m Punjab da puttar (son of Punjab) and farming is in my blood.”

Landing here on Wednesday straight from Mumbai, Deol met families of soldiers who sacrificed their lives for the nation at a border village in Dinanagar area.

“I am not a hero as I only acted as a soldier. The real heroes are those who sacrificed their lives for the country,” he told a family.

Gurdaspur lies in the north of Punjab, sharing an international border with Pakistan and the troubled state of Jammu and Kashmir. The area is not as developed as other areas in Punjab.

Deol, who is not missing an opportunity to pay obeisance to Sikh shrines and Hindu temples during his campaigning, is pitted against Congress state unit President Sunil Jakhar, who won the October 2017 by-election with a margin of 1.92 lakh votes.

The bypoll was necessitated with sitting MP Vinod Khanna’s death.

The BJP did not give the ticket for the bye-election to Khanna’s widow, Kavita Khanna, a strong claimant for the seat.

With the fielding of Deol, Kavita Khanna expressed her disappointment, saying she felt “betrayed” by the party.

The Gurdaspur constituency, which has 14,68,972 voters, including 72,6363 women, has nine assembly constituencies. It has a high number of serving and retired defence personnel and the BJP is trying to woo them by using the ‘fauzi’ image of Deol.

The former members of Parliament from Gurdaspur are Sukhbuns Kaur Binder of the Congress, who won the seat five times in a row till 1996 when she faced her defeat from BJP’s Jagdish Sawhney; from BJP’s Khanna (1998 to 2009) and Congress’ Pratap Singh Bajwa from 2009 to 2014.

He lost the poll in the 2009 general election to Congress leader Bajwa with a slender margin.

In 2014, Khanna had again won by a thumping margin of over 1.38 lakh votes. A local BJP leader told: “Khanna won his last election not due to his stardom but because of Modi wave. This time too his magic will work here. Moreover, Deol is known for playing nationalist.”

Locals believe the Modi wave might work for Deol, too. “Deol, who is a Jat Sikh, will help winning the state as the constituency is dominated by the Jat Sikhs,” a senior BJP leader said.

A confident Congress candidate Sunil Jakhar, though, said: “I have been a Dharmendra fan. I like Sunny Deol as an actor. The people will prefer a local than an outsider (Deol). I wish him all the best.”

“He is unaware of the issues of Punjab and Gurdaspur. He should share his vision for Gurdaspur. What is his agenda for the people here?” asked Jakhar.

The Gurdaspur constituency has seen two major militant attacks by Pakistan-backed militant outfits in the recent past.

It is believed by the BJP that terror attacks and Deol’s stardom will trigger the BJP magic.

“As Modi has sent the air force to destroy terror camps in Pakistan after the Pulwama attack, so is Deol who has thrashed militants with iron hands in movies. So people in Gurdaspur like both Modi and Deol. His stardom will catch votes for BJP,” a local BJP leader said.

Jakhar, who started his campaigning well ahead of Deol, won the seat when the Congress government in the state just came at the helm. Now after two years, the government has anti-incumbency. This factor will make Jakhar’s victory tough, admitted a senior Congress leader.

In 2017, most of the state ministers had campaigned for him. Now, even Jakhar doesn’t enjoy a good relation with Chief Minister Amarinder Singh.