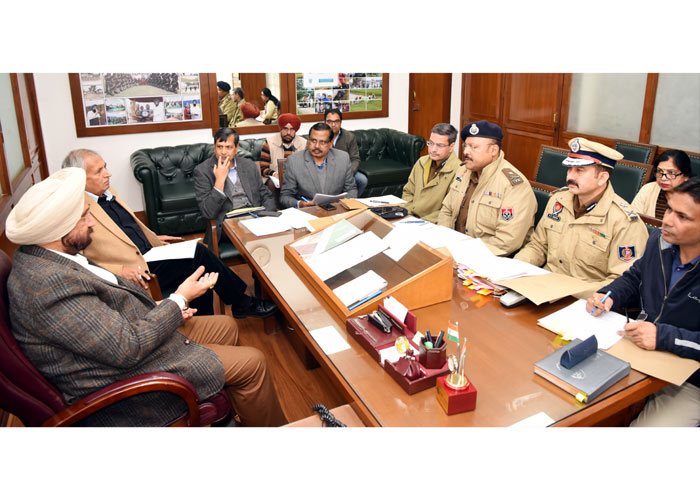 The Jails Minister, Punjab, S. Sukhjinder Singh Randhawa today presided over a high level meeting with the senior officers of the Home, Jail, Police and other departments.

Addressing the mediapersons, S. Randhawa said that out of the 21 high security zones to be constructed in the jails of state, 12 have been completed while the work on 9 is going on at rapid pace. These zones would be equipped with cutting edge technology in which criminals of ‘A’ category would be kept.

There would also be full body scanners in the jails. The issue of ensuring cent percent security system to stop the mobiles and other articles being thrown inside the jails was also discussed. The CCTV cameras have already been set up with provision for colour cameras in future.

On the issue of new recruitment of necessary staff in jails and taking officers on deputation from the police department, S. Randhawa said that the Punjab Cabinet has okayed the recruitment of 305 new warders. Apart from this, it was also decided to reorganize/rationalize the posts for ascertaining the exact number of vacancies for the purpose of new recruitment process.

The Jail Minister further added that it was also decided to prepare a proposal for taking 20 officers of inspector rank from police department and deputing Deputy Superintendent Grade -2, 2 Senior AIG/SP and 6 SP rank officers on the post of DIG/Jails.

The minister further said that the case of deputing CRPF in six jails for security was sent to the centre out of which CRPF has been deployed in Amritsar, Bathinda, Kapurthala and Ludhiana while in the remaining two, it is yet to be deployed for which the Home Ministry would be approached.

The new jail at Goindwal Sahib is 75 percent complete. The minister instructed the officers of the jail as well as the PWD to speed up the work of the jail.

It was also decided to approach MPs of the State to purchase new ambulances for the jails out of the discretionary quota of MPLADS funds. He said that some MPs have agreed to the proposal and the case would soon be sent to the Finance Department.