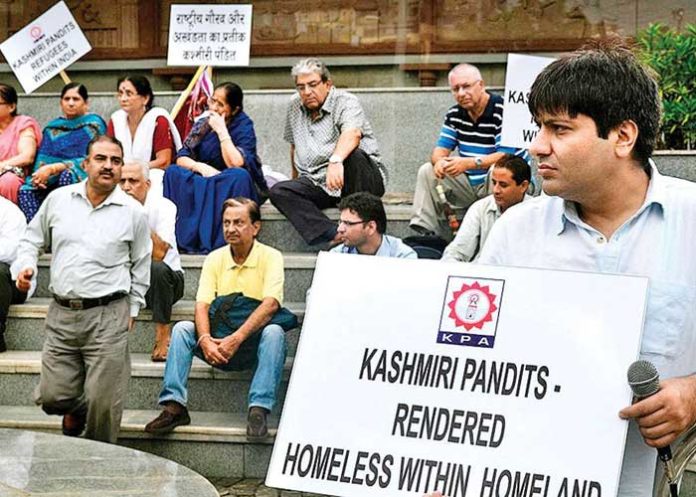 New Delhi, October 19, 2020 (Yes Punjab News)
Hindu Kashmiri Migrants have urged Governor Manoj Sinha to look into the deliberate and malicious intent of a section in the Jammu and Kashmir Administration which is denying jobs to Kashmiri Pandits.

Satish Mahaldar, Chairman of Reconciliation, Return & Rehabilitation of Kashmiri Migrants, in a press release issued here today, said, a deliberate attempt is being made to sabotage the poor Kashmiri Pandits in Jammu and Kashmir. It seems that some people in the administration are trying to deny what is rightfully due to the poor KPs, thereby undermining the Modi government’s schemes/ initiatives and even Court’s orders.

The order says that sanction has been granted to the withdrawal of the 1997 unfulfilled encumbrance free posts from 18 departments, and seeks reallocation of the posts. This order is unjustified and wrong as 45 candidates have already been selected through rightful criteria and process.

The reference itself is illegal and unjust for the reason that the process of recruiting the eligible candidates has long back been done. The selected list is with the government and the candidates are awaiting the appointment letters. Since the last 18 day selected Kashmiri pandit candidates are on a hunger strike near press club Jammu & state administration is deliberately ignoring HC & SSRB recommendation.

This is part of the Special PM employment package of the past Dr Manmohan Singh regime. Under this scheme, the recruitment process for 6,000 vacancies of J&K government has already been completed. The leftover candidates have even moved the High Court for a mandamus to the government for issuance of appointment letters pursuant to the selection by JKSSB.

The matter was referred to CAT and is now pending final disposal in CAT.

The Division Bench of HC has ruled that eligibility is the only criterion for such rehabilitation recruitment schemes. If the selected candidates have not been given the appointment letters, then what is the purpose of the fresh notification.

The current Govt order is, therefore, unjust, illegal, and fraught with mischief to deprive employment to those already eligible and those who may or are likely to get overaged during the delay caused by the Government by not issuing the appointment letters.

This mischief requires to be set right.

We have, in the last seven decades, often raised our voice against the discrimination meted out to Kashmiri Pandits in the valley. Government jobs have always been denied to eligible candidates on one or the other pretext. And, the same seems to be happening now also.

Kashmiri pandits relatively small numbers, coupled with a tradition of non-violent protest has made the Pandits largely irrelevant in the political discourse – both within ‘peace processes’ and ‘political solutions’ that are initiated in J&K from time to time have little meaning until these include some steps to correct the grave injustices done to this unfortunate community.