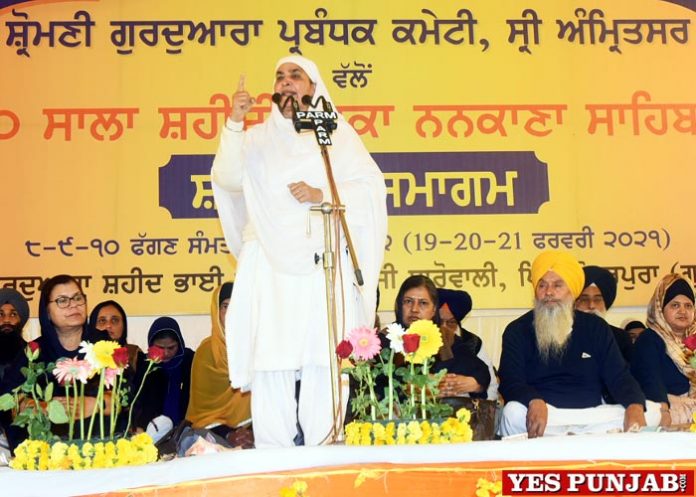 It is notable that the family of Shaheed Bhai Lachhman Singh Dharowali, who led the Jatha (group) during Saka Nankana Sahib, had migrated to this town after partition (in 1947).

SGPC planned a three-day function here, which started with the inauguration of Sri Akhand Path Sahib on Friday.

A large sangat participated in the women’s congregation held on the second day on Saturday.

SGPC president Bibi Jagir Kaur was present on the occasion, said in her address that the martyrdom of Sri Nankana Sahib is a page in Sikh history which had made a significant contribution in bringing the management of Gurdwaras in the hands of Sikh Panth. “By uniting the kaum this incident not only made them aware of the future but also instilled in them the spirit of sacrifice for the dignity of their shrines”, said Bibi Jagir Kaur.

SGPC President said that the participation of women in this event is also an important part of Sikh history, hence one-day function during the centenary celebrations has been dedicated to Bibi Tej Kaur and Bibi Inder Kaur.

She said that the contribution of women in the society could not be denied and at present the responsibility of women was even greater.

“It is the duty of women to connect the youth with Gursikhi and history, which they should take seriously. Mothers can play a major role in inculcating Sikh concern in children for the betterment of the kaum. Dedicating the 100th anniversary of Saka Nankana Sahib, it is the duty of every Sikh to strive for the rising art of Sikhism by following in the footsteps of his martyrs”, said Bibi Jagir Kaur.

Prominent personalities present on the occasion were honored with Siropao (robe of honour).

During the function, key members and officials of the SGPC and a large sangat were present.

The main event would be held on Sunday, February 21, organized by the SGPC at Godharpur, on the occasion of the centenary of Saka Nankana Sahib and prominent personalities of the Sikh Path will be present in the same.

She said that all arrangements have been made by the SGPC for this main function. The sangats of Godharpur village are giving full support during all the functions.