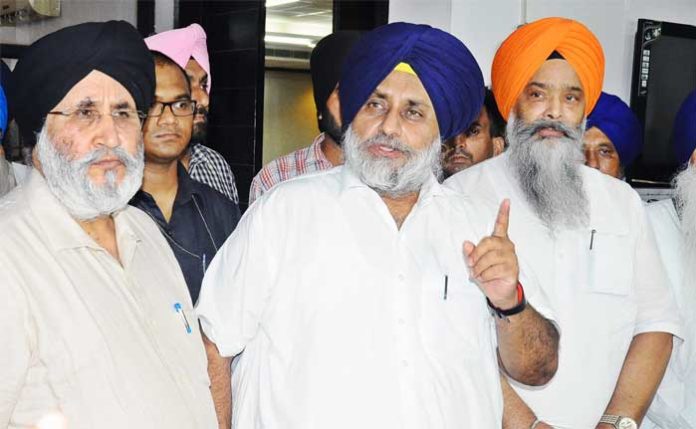 The Shiromani Akal Dal today outrightly rejected the closure report on the investigations into the painful events of sacrilege of Shri Guru Granth Sahib at Bargadi. The party declared that it “will challenge the closure report and take all legal, constitutional and political steps to get the probe by the apex investigating agency reopened and taken to its logical conclusion.

The party will not sit silent until all the culprits in this heinous crime and their masters in the conspiracy are exposed, booked and given exemplary punishment as per the law. Apart from the relentless legal fight, the SAD will use every peaceful democratic means and will stop at nothing in nothing to ensure that no one who has had a direct or indirect hand in and behind this heinous outrage escape the long arm of law,” said the party.

A decision to this effect was taken at a meeting of the Core Committee of the party at the party Headquarters here this afternoon.

Giving details of the meeting, the party spokesperson Harcharan Singh Bains said that the meeting which was chaired by the party which met with president Sukhbir Singh Badal in the chair, also decided that a delegation comprising the SAD leaders would call on the Union Home Minister Shri Amit Shah an urge him to intervene in the matter for withdrawal of the closure report and for ensuring that all immediate and urgent steps to get the probe completed are taken as a priority so that the culprits of this despicable crime are booked and severely punished.

Simultaneously, a team of legal experts will pursue the matter in a court of law to make certain that the deep conspiracy behind the painful chain of events pertaining to the tragic and grievous acts of sacrilege is fully exposed and the hitmen and their bosses and conspirators are given punishment that should serve as exemplary deterrents for future culprits, said Mr Bains in a statement after the Core Committee meeting .

“There is no justification in filing the closure report by the CBI when the probe in none of the issues referred to it for investigation by the SAD-BJP government at the persistent behest of several Sikh religious bodies has been completed by the apex body.

The Sikh organizations had been demanding a probe by the central agency as these bodies expressed a lack of faith in the probe being conducted by the Special Investigation Team of the Punjab Police headed by the then IG IPS Sahota and comprising DIG R S Khatra and others.

Later talking to mediapersons at the party office, Mr Sukhbir Singh Badal said that he had been taken aback by the CBI’s closure report. ”The culprits are still to be charged, tried and punished. The Sikh masses want the entire truth behind the tragic sacrilege incidents to be fully brought in the open, criminals to be identified and given the severest punishment under the law of the land, ,” said Mr Badal .

The SAD chief said that he firmly believed that those who committed such outrage against the most sacred scripture of humanity deserve to be hanged. “They and the conspirators behind them deserve no mercy. Because of their acts, the hearts of millions and millions of Sikhs and of all right thinking persons in every community are bleeding.

There are no words that can adequately express the profound pain that the devout Sikh masses have suffered because of these heinous crimes.I demand death penalty for the hitmen and for their masters. ,” said the SAD chief.

The Core Committee expressed the party’s firm conviction that the tragic acts of sacrilege were staged under a deep rooted conspiracy to defame the then SAD-BJP government in Punjab, to destabilize the social and political fabric of the state and to disturb the atmosphere peace and communal harmony among Punjabis.

The party said that the entire chain of events behind the murder of the prime suspect under the most suspicious circumstances in jail also needs to be thoroughly probed as he ( the suspect) could not only have provided clinching evidence on the culprits but may also have provided the most critical information on the key players in the entire conspiracy behind these shameful acts.