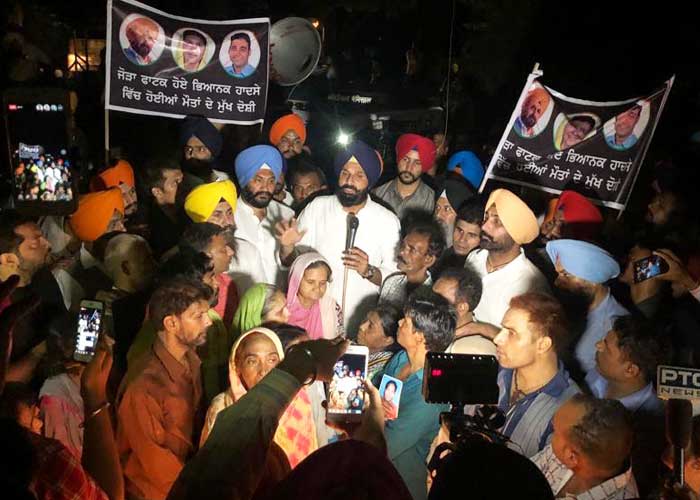 The Shiromani Akali Dal (SAD) today along with the citizens of the city and victim families of the tragic Dasehra tragedy which claimed 61 persons and injured another 100 held a candle light march from Ramtalai to the Dhobhi Ghat near Jaura Phatak where a train mowed down people watching the customary burning of Ravana at an unauthorized function organized by a close aide of the Sidhu couple – Navjot Sidhu and Dr Navjot Kaur Sidhu.

A large number of people led by members of the victim families, prominent citizens of the city and SAD leaders including former minister Bikram Singh Majithia, Harmeet Dhillon, Virsa Singh Valtoha and Veer Singh Lopoke held placards demanding justice, affixing responsibility for the tragedy, punishing the guilty by registering criminal cases against them, arresting them and fulfilling all the promises made to the victim families.

People participating in the candle light march including victim families shouted slogans against the Sidhu couple and asked why former Minister Navjot Sidhu had gone back on his promise to provide jobs and pension to all the victims of the ghastly train tragedy.

Talking to the newsmen while participating in the candle march, Mr Bikram Majithia said three inquiries had been held in the case but no one had been booked and no action was taken in the matter.

He said the inquiry conducted by the Jalandhar Divisional Commissioner was only aimed at saving Congressmen who were directly responsible for the tragic incident. “The Commissioner was not expected to take action against the then cabinet minister and his wife and this is exactly what happened. Even the close aide of the Sidhu couple – Mithu Madan was shielded making the inquiry a cover up operation”.

Demanding justice for the victim families, the SAD leader said “we have come here only to express solidarity with the victim families. Everyone knows that an unauthorized programme was held only at the intervention of the former Local Bodies minister. But no action has been taken in the matter.

The Congress government could have acted in 24 hours if it wanted. Even now we only want that the guilty should be punished, appropriate compensation should be given to the victim families and one member from each victim family should be given jobs as promised. Steps should be taken to ensure such an incident does not occur again”.

But nothing has been done in one year. The government has failed to even get the forensic reports about the case. This is the level of their seriousness to give justice in the case”, he added.