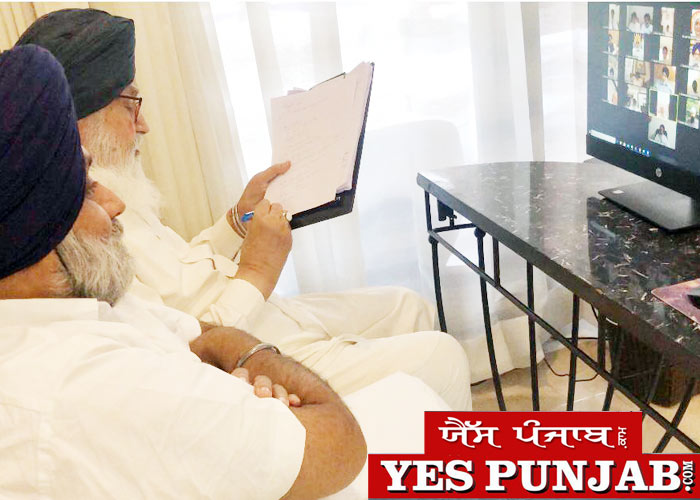 The Shiromani Akali Dal (SAD) today urged the centre to give bonus on wheat MSP besides sending a team to inquire into misappropriation and embezzlement of food material despatched to the State, even as it asked the Punjab government to remove the glut in ‘mandis’ by lifting wheat and helping those in crisis through direct cash transfers and waiver of electricity bills. It said the Punjab government should also announce a wheat bonus to help the beleaguered peasantry.

Resolutions to this effect were passed at a virtual meeting of the core committee which was presided over by SAD President Sukhbir Singh Badal and attended by all members besides party patron and former chief minister Parkash Singh Badal.

The core committee expressed its concern that inclement weather coupled with restrictions on sale of wheat had resulted in grave hardship to farmers. It said a bonus was needed to offset the losses being suffered by farmers even as it asked the centre to give directions to FCI to relax moisture norms and procure shrivelled and discoloured wheat to help farmers in this hour of crisis.The committee also asked the Punjab government to take immediate steps to work out a bonus on wheat besides taking steps to supply the required number of gunny bags to all

‘mandis’ to ensure lifting of wheat. “Most Mandis have become clogged due to lack of lifting which could translate into a health hazard soon if not cleared”, SAD President Sukhbir Singh Badal noted even as he asked chief minister Capt Amarinder Singh to intervene and end partiality in distribution of passes.

Among other steps need to provide relief to farmers, the core committee asked the State government to facilitate potato growers to transport their produce to other States besides giving permission for start of private milk plants to ensure dairy farmers do not suffer due to shortage of demand.

The core committee also resolved that the Punjab government should come to the aid of ‘Khet mazdoor’ and daily wagers through direct cash transfers to them besides waiving off electricity bills of all blue card holders for three months. It also asked the government for waive off fixed charges for the industry for three months and do away with all municipal taxes for a similar period.

The committee asked the government to revise its strategy to counter COVID-19 following reports that COVID deaths in Punjab were among the highest in the country. It also asked the State to ensure adequate PPE kits for health workers and ‘safai karamchari” and asked it to bear the cost of medication of COVID patients in private hospitals also.

Members also pointed out that sheer medical negligence and subsequent disrespect shown to the mortal remains of Padamshri Bhai Nirmal Singh had hurt the sentiments of the entire Sikh community. It was resolved to demand that the State order a judicial inquiry into the entire incident by a High Court judge. Members also paid condolences to Bhai Nirmal Singh, ACP Anil Kohli and all other victims COVID victims in the State.

The Core committee also thanked the Union government including Prime Minister Narendra Modi and Home Minister Amit Shah besides Maharashtra chief minister Uddhav Thackeray, Union minster Harsimrat Kaur Badal and the Hazoor Sahib management committee for their collective efforts which had resulted in the start of repatriation of Sikhs pilgrims stranded in Nanded back to Punjab. It also thanked the SGPC, SAD workers as well as NGOs for the unprecedented ‘langar’ services initiated by them to help the poor and needy in this hour of crisis.