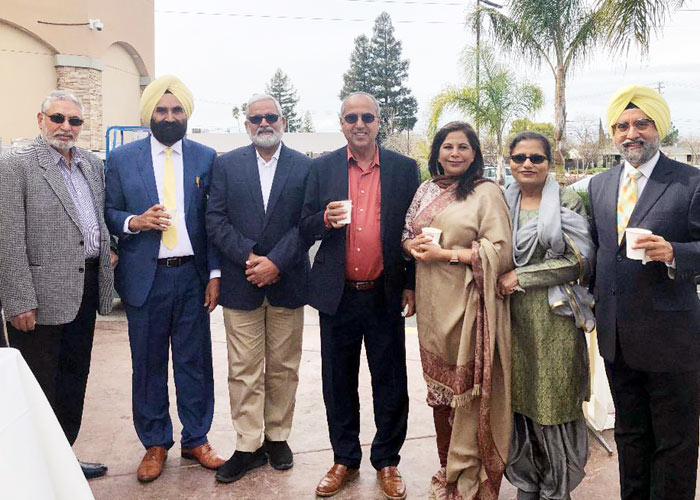 Over 700 people from all over Sacramento came to watch the premiere of the Guru Nanak documentary. This was organized by the local team of the National Sikh Campaign. Mirage Banquet Hall owners opened their doors and hearts to the showing of the documentary on Sikh Founder’s life and legacy.

There was a festival like atmosphere and people were greeted with all kinds of delicacies and deserts and free dinner was served after the show for all the attendees.

This film titled ‘Guru Nanak The Founder of Sikhism Life and Legacy’ has been made by the Auteur Productions and it will be shown on 200 TV stations across America by the PBS channel. National Sikh Campaign has supported the making of this documentary.

NSC team had gathered an impressive panel of interfaith leaders, elected representatives and police officials. The audience applauded as the film ended and people surrounded the filmmaker Gerald Krell to thank him for his artistic contribution.

Dr. Lakhwinder Singh Randhawa, board member of NSC, welcomed the audience and said, “This documentary has been made with the support of community members and this masterpiece is the result. We are very thankful to the filmmakers for their hard work and for presenting the story of Guru Nanak in a very engaging manner. It is fast moving story and one does not feel bored even for a second.”

Auteur Productions has received the ‘Best Director’s Award at Los Angeles‘s Awareness Film Festival last year for this film. PBS is showing this film on its affiliate stations across the nation in America.

Dr. Rajwant Singh, Senior adviser to the National Sikh Campaign said “This documentary is primarily made for the western audience since there is total ignorance about Guru Nanak in America and other parts of the world.”

Dr. Ravneet Dhillon, one of the organizer of the event, said, “We are thrilled with the response of the community. I was impressed how young kids also watched this film with utmost attention. That shows that appeal of this documentary among all age groups.”

She added, “This film provides us an opportunity to reach out to other communities and start a dialogue. Non-Sikh audience was very receptive to the message of Guru Nanak particularly how it is presented in the documentary.”

Dr. Parm Randhawa, head of the Kohinoor Club and one of the main organizer of the event, said, “The documentary has surpassed the expectations of the people. It is very well-made and it appeals to everyone’s heart. This was evident from the response of the guests who attended the screening. “

Virgil Nelson, a Christian leader said, “To me this documentary is a testimony to actual living of the values of the Sikh faith and the teachings of Guru Nanak. This can bring so many faith communities together.”

JJ Singh Kapur, Stanford University student and who has played a role in the film, narrated his learning from the documentary, “This film is about us. Guru Nanak started his journey as a young person and it is empowering to see how he was able to accomplish so much as a young person and so can we. Just as he was so confident and was able to stand up and voice his opinion, similarly we can also be confident in our skin.”

Captain James Barnes from the Sheriff Department said, “This film’s message resonates with me – Service before self. As police officers, We don’t ask question we must provide service. The more we can come together like this, the better it is for all of us. This will be helpful in creating understanding in the society.”

The film cost $430,000 and many Individuals from all over United States and a few from India contributed to make this film.