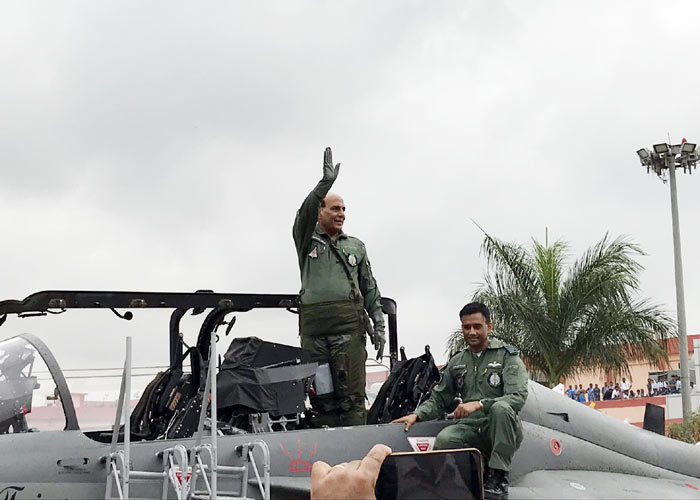 Singh, who became the first Defence Minister of the country to fly in a Tejas, took to the cockpit of the fighter jet with a pilot in the front seat.

The fighter jet, a twin-seater trainer aircraft, took off from the airport of the state-run Hindustan Aeronautics Limited (HAL) in this tech hub for a 30-minute sortie at 9.58 a.m under a cloudy sky.

A senior IAF officer and a ground staff at the airport guided Singh in taking the rear seat inside the cockpit ensuring all safety gear were in place.

Singh waved out to the crowds at the HAL airport before the fighter jet took to the runway.

Shortly before entering the cockpit, Rajnath posted his photographs dressed in a G-suit on Twitter.

“All Set for the Day,” he tweeted.

On Wednesday, Singh had left for Bengaluru to participate in the programme that has been jointly organised by the HAL and the DRDO.

Singh’s maiden flight on the Tejas comes ahead of the Indian Air Force (IAF) placing an order for 83 jets with the HAL, the manufacturer of the 4-plus generation combat aircraft.

In the first week of September, the pricing-related issue of the 83 jets, which had been hanging fire for long, had been successfully resolved by the Department of Defence Production with the HAL.

The new batch of 83 jets will be in addition to the 40 aircraft that have already been ordered by the IAF.

On September 13, the naval version of Tejas LCA had achieved a major milestone with a successful “arrested landing” at the shore-based Test Facility of INS Hansa in Goa. The Indian Navy had hailed September 13 as a “golden letter day” in its history.

Singh made a familiarization sortie to get acquainted with the air prowess of the indigenous fighter.

“Before take-off, the 45 Squadron Flying Daggers of the Indian Air Force (IAF) briefed Singh about the LCA’s avionics, controls and radar in the glass cockpit and the weapons it carries for strike power.

The squadron is based at the Sulur air base near Coimbatore in southern Tamil Nadu.

Tejas is a single engine, delta wing, multi-role fighter, designed and developed by the city-based Aeronautical Development Agency (ADA) of the DRDO and built by the aerospace behemoth Hindustan Aeronautics Ltd (HAL).

Though the IAF will initially have two squadrons of Tejas with 18 fighters each, it plans to have more of them with an additional 83 of them as Mark-1 version.

In the past, former defence minister Nirmala Sitharaman flew in a Sukhoi-30 MKI fighter of the IAF on January 17, 2008 from Jodhpur air base in Rajasthan. She was also the first woman Raksha Mantri to fly in a fighter as a “co-pilota.

Former Presidents Pratibha Patil and A.P.J. Abdul Kalam also flew in Su-30 on November 25, 2009 and June 8, 2006 from Pune in western Maharashtra when in office as Supreme Commander of the armed forces. Patil was the first woman President and Kalam the first President to fly in a military fighter.  (Agency)