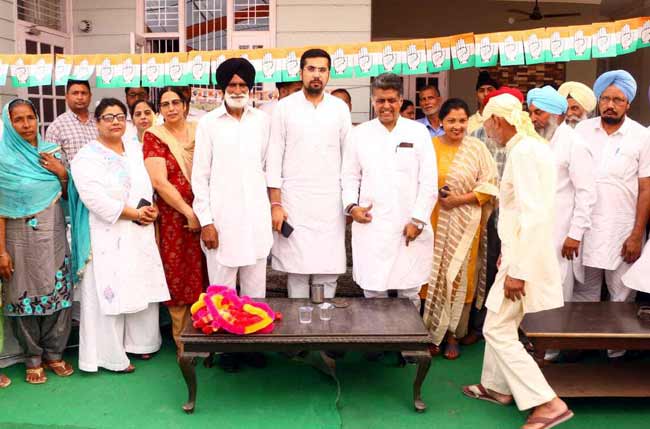 Senior Congress leader and party candidate from Shri Anandpur Sahab, Manish Tewari today said that the Punjabis and the Congressmen do not need any lessons on nationalism from anyone, much less from the Prime Minister Narendra Modi. Tewari also condemned Modi for stooping very low to abuse former Prime Minister Rajiv Gandhi with utter lies.

In an informal interaction with reporters after attending several party meetings here today, Tewari, when asked as how was Congress going to counter the “nationalist narrative” of the BJP, said, Congressmen and the Punjabis do not need any lessons about patriotism and nationalism from any one.

“Majority of the freedom fighters who went to jail or laid down their lives for the freedom of the country were the Punjabis and all of them were Congressmen”, he said, while asking the Prime Minister to name a single nationalist BJP can claim represented their ideology.

Similarly, he added, the BJP stood nowhere in comparison to the Congress party when it came to laying down their lives for safeguarding the unity and integrity of the country. “Ms Indira Gandhi, Rajiv Gandhi, late Beant Singh, my father Prof Vishwanath Tewari and scores of other Congressmen have laid down their lives for the country”, he pointed out, while asking, “can Mr Modi mention a single BJP leader who has laid down his life for the country?”

Tewari refused to comment on the claims of Akali candidate Prem Singh Chandumajra that Shri Anandpur Sahab was a ‘panthic’ seat. He said, for him every seat in Punjab was panthic as everyone believes in the panthic ideals of universal brotherhood and non-discrimination with anyone.

Maintaining that Chandumajra was entitled to his own opinion, the Congress leader said, he (Chandumajra) was however feeling frustrated over the resentment he wss facing from people in the constituency. He said, at several places people have confronted him with “go back” slogans as he has completely failed them during the last five years.

Tewari was accompanied by the local MLA, Angad Singh Saini and other senior party leaders from the area.