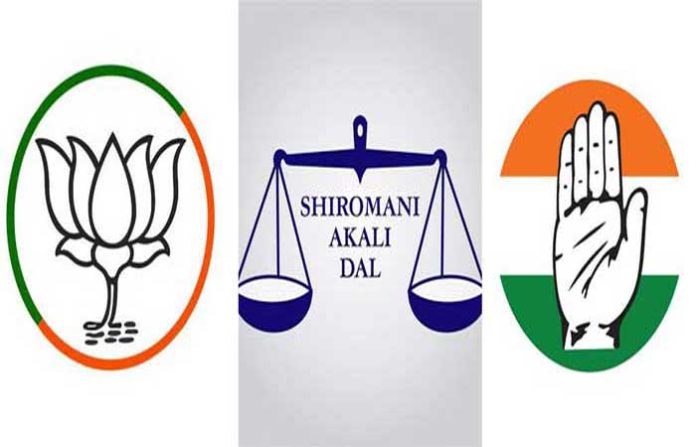 Punjab’s ruling Congress won eight of the 13 Lok Sabha seats, one of the few states where it did well, while the BJP and its ally Akali Dal bagged two seats each. Bhagwant Mann, the AAP’s only hope, retained his seat.

The main contest was between the ruling Congress and the Akali Dal-BJP combine.

However, all eyes were on two seats — Amritsar and Gurdaspur — witnessing a clash of personalities.

The diplomat-turned-politician Puri faced a tough fight in the constituency dominated by the Jatt community. He was worsted by over 100,000 votes.

In Gurdaspur, actor Sunny Deol was the Bharatiya Janata Party candidate against Congress state President Sunil Jakhar, who won the October 2017 by-election by 1.92 lakh votes. Deol won the seat by over 85,000 votes.

Harsimrat Kaur was locked in a multi-cornered contest from the Akali Dal stronghold Bathinda, where the others in the fray were Congress candidate Amrinder Singh Warring, AAP’s Baljinder Kaur, Punjabi Ekta Party candidate and Bholath legislator Sukhpal Singh Khaira.

Two-term MP from the seat, she drubbed the Congress candidate Amrinder Singh Warring by over 20,000 votes.

In 2014, Harsimrat Kaur scraped through by 19,500 votes against her estranged cousin Manpreet Badal, now a Cabinet Minister in the Captain Amarinder Singh-led Congress government.

Her husband and former Deputy Chief Minister Sukhbir Badal, 56, the man known for micro poll management of his 98-year-old party, won Ferozepur by a record margin of 199,000 votes.

In Patiala, former Union Minister Preneet Kaur, wife of Chief Minister Amarinder Singh, was in the fray for the fifth time.

The three-time MP was defeated by the AAP’s Dharamvira Gandhi by over 20,000 votes in 2014. This time Gandhi was in the fray as a nominee of the Nawan Punjab Party, a new outfit, and he faced a defeat by a margin of 1.62 lakh votes.

In Ludhiana, Ravneet Singh Bittu, grandson of late Chief Minister Beant Singh who was assassinated in 1995, retained the seat by a margin of over 76,000 votes.

Former Union Minister Manish Tewari was in the fray from Anandpur Sahib. He was pitted against sitting Akali Dal MP Prem Singh Chandumajra.

Unlike 2014, the infighting-ridden AAP was struggling to save its sinking ship, with several leaders either having defected or facing suspension.

Countering defections within the party, actor-comedian Bhagwant Mann, who retained the Sangrur seat, accused party rebel Sukhpal Singh Khaira of being an agent of both the Congress and the Akali Dal and of engineering defections of AAP legislators to the Congress.

Chief Minister Amarinder Singh said he would take up with the Congress high command the issue of Navjot Singh Sidhu’s damaging remarks ahead of polling in Punjab, which he said might have affected the party’s performance in Bathinda.

Though he refused to comment directly on the possible impact of Sidhu’s comments on the Congress performance in Punjab, Amarinder Singh said as a Minister, Sidhu’s own performance needed to be reviewed.

In 2014, the Akali Dal-BJP won five (four Akali Dal, one BJP) while the Congress and the AAP had four seats each. (Agency)