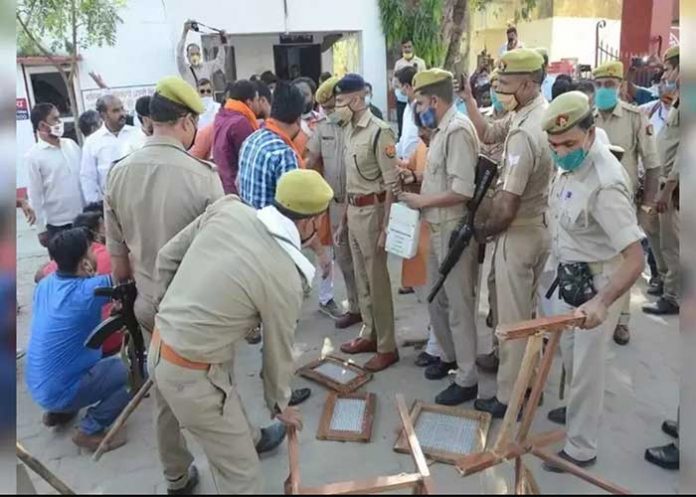 Bareilly (Uttar Pradesh), Oct 21, 2020-
Members of several Hindu outfits vandalised the Quila police station in Bareilly after the police failed to trace a girl who had eloped with a youth of another community.

The girl, who is a minor according to the family, had gone missing on October 17 and an FIR was registered at the police station.

On Tuesday evening, a video was sent to the local police, in which the girl can purportedly be seen claiming to be a adult and said that she had married the youth on her own will. She also requested the police not to harass the youth’s family members.

This apparently angered the Hindu activists who, along with the girl’s family members, reached the Quila police station and vandalised it.

Additional Director General (Bareilly zone) Avinash Chandra along with DIG Rajesh Pandey and SSP Rohit Singh Sajwan rushed to the spot along with additional force and controlled the situation.

SSP Rohit Singh Sajwan said, “We had deployed four teams to find the girl and we will find them soon. A sub-inspector and constables who used force on the family have been suspended while the SHO has been transferred to reserve police lines.”

The ADG said, “There is no ‘love jihad’ issue here and we will recover the girl on top priority. A few anti-social elements amongst the protesters tried to disturb the communal harmony, but we have controlled the situation.” (Agency)