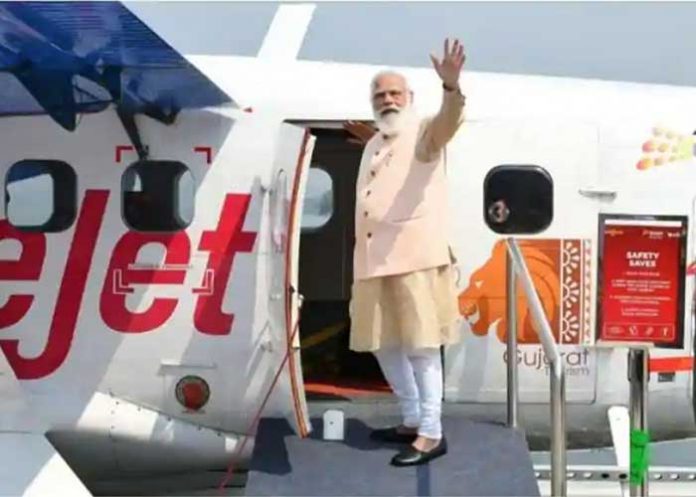 Kevadiya (Gujarat), Oct 31, 2020-
Prime Minister Narendra Modi on Saturday inaugurated the country’s first seaplane service in Gujarat and undertook a journey on its inaugural flight from Sardar Sarovar in Kevadia to the Sabarmati riverfront in Ahmedabad.

The 45-minute seaplane service — launched on the 145th birth anniversary of Sardar Vallabhbhai Patel — connects the Statue of Unity at Kevadia with the Sabarmati riverfront 200 km away. The seaplane service was started by SpiceJet aviation company.

Modi also inaugurated a Water Aerodrome on the Sabarmati Riverfront in Ahmedabad. It is a part of a series of Water Aerodromes planned to bring the last-mile connectivity in the country.

Earlier, during his address on Sardar Patel’s birth anniversary, Modi said: “Today, seaplane service from the Sardar Sarovar to Sabarmati riverfront is also going to be launched. To see the Statue of Unity, the countrymen will now also have the option of seaplane service. All these efforts are going to give a big boost to tourism in this area.”

The seaplanes with their ability to land and take-off from water surface help connect geographies or regions that otherwise are a challenge owing to tough topography and help bring the remotest parts of India into the mainstream aviation network without the high cost incurred on building airports and runways.

These smaller fixed-wing airplanes can land on lakes, and dams, and even gravel and grass, thus offering easy access to numerous tourist spots.

The service will be provided incentives and benefits under the central government’s ‘Udaan’ scheme, which is getting implemented as per a tripartite agreement between the Gujarat government, the Ministry of Civil Aviation, and the Airports Authority of India.  (Agency)