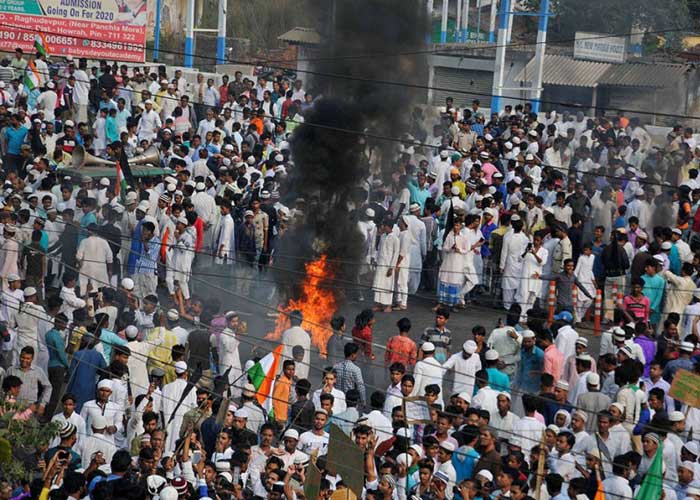 Two trains were vandalised, and railway stations, track, property and RPF vehicles were set on fire as Trinamool Congress and Congress members joined the protests against the new citizenship law (CAA), obstructing train and vehicular movement, prompting the state government to shut down internet services in some parts of West Bengal on Sunday.

Tyres were burnt and key national and state highways were blocked for the third day in the state by anti-CAA protesters in various districts of West Bengal.

With the violence showing no signs of abating, the state government suspended internet services in Malda, Murshidabad, North Dinajpur and Howah districts, and accused some “externally mobilised communal forces” of “inciting violence’ and creating disturbances”.

The most serious incident took place in Acra station in South 24 Parganas district where the protesters vandalised a train and set afire a part of the railway track.

The mob smashed the ticket vending machines and the furniture, and set the counter afire along with the paper tickets. The fire brigade could not reach in time due to the road blockades outside the station while the protesters threw stones. Police reinforcements were rushed to the spot which resorted to baton charge and lobbed tear gas shells, forcing the protesters to beat a retreat.

In Usti, protesters staged demonstrations by burning tyres on the road, and obstructed train services at Magraaht and Mallickpur stations.

The situation turned ugly at Lohapur station in Birbhum district, as a frenzied group of people torched the railway platform.

Other incidents of rail and road blockades continue to be reported from other parts of the state, even as the agitation intensified in Malda and North Dinajpur districts, and also reached Bankura.

Trinamool MLA Swapan Bauri led a group of protesters in burning tyres and blocking the National Highway at Gangajalghati of Bankura district.

At Amdanga in North 24 Parganas district, protesters staged a demonstration by felling a tree and burning tyres on the road at Sonadanga and Dhankal on National Highway 34. At Kamdevpur, the protesters first blocked the highway and then started cooking on the road to start a ‘picnic’.

Protesters blocked the Naihati road in Ashoknagar, and staged a demonstration on the Madhyamgram-Jessore Road.

In Birbhum, Murarai-Raghunathganj state Highway was obstructed at Hiyatnagar, and Mitrapur by burning of tyres, while the Bhaluka Road station was blocked in Malda district.

Railway services were badly affected due to the stir. EMU local train services on Howrah-Kharagpur section of South Eastern Railway resumed on Saturday evening after being stalled for 10 hours.

The Eastern Railway has cancelled nine express and four long distance passenger trains which were scheduled to run on Sunday.

“They have only silently watched the disturbances which have spread. She (Banerjee) wants this to happen. She may retain her vote bank, but West Bengal will cease to exist,” said Ghosh.  (Agency)