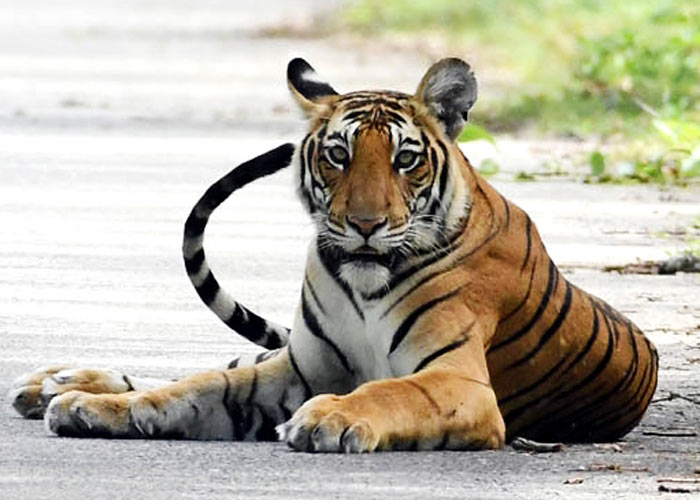 The man-eating tiger, which was at large for five days, was tracked down and safely captured in Karnataka’s Bandipur reserve forest on Sunday after tranquilising it, an official said.

“The tiger was captured late in the afternoon (around 2:30 p.m.) with the help of Soliga tribals, who spotted it hiding in a bush,” state Chief Wildlife Warden Sanjay Mohan, who was supervising operations from outside the forest, told over phone.

The tiger, aged 4 to 6 years, had killed two men since last month and a search was on for the animal since October 9 in the 872km Bandipur forest in the state’s Chamarajanagar district, about 220 km southwest of Bengaluru.

Soligas, who are experts in hunting the wild animals in the forests, found the tiger hiding in a thick bush and guided the guards and the vets to the spot.

“The tiger was hit by a tranquiliser dart by forest guards atop on an elephant based on the Soligas’ cues, but that attempt failed as it recovered quickly from the impact of the dart and crossed over a stream into another thicket. As a result, the Soligas had to again track it down,” said Mohan.

The Soligas, however, managed to spot it again and enable the big cat be hit with another dart, which succeeded in immobilising it, he said.

The veterinary doctor administered an antidote to the tiger after it was brought out of the forest to revive it.

“The tiger will be shifted to Mysore rehabilitation centre on Monday after conducting routine tests and a check-up,” Mohan added.

The search for the elusive tiger was intensified earlier in the day, on foot and on elephants, by about 60 forest guards, 5 Soligas and 3 veterinary doctors after the partial remains of a just-born elephant calf it killed and ate was found in the jungle.

Mohan had earlier told that the tiger killed the calf near the safari in a 10km radius of Melkamanahalli village in the jungle, and termed it a “good sign for knowing its whereabouts and helps us to search in the target area to capture it”.

Shivappa, a farmer, was the second victim of the big cat, which is said to have turned man-eater over a month ago after killing Shivamadaiah in its territory when he was returning to his village with two bullocks from another nearby village.

The tiger has devoured 14 cattle during the last two months.

The state Forest Department obtained a camera trap picture of the tiger early on Saturday.

The search operation was conducted as per the guidelines of the National Tiger Conservation Authority (NTCA).   (Agency)