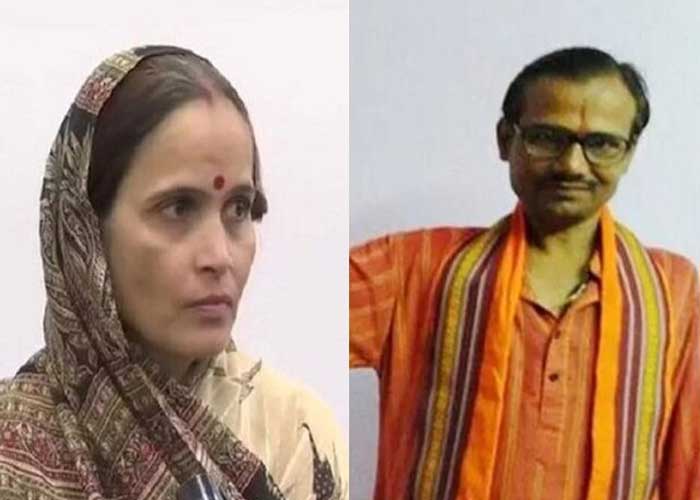 Kiran Tiwari, the wife of slain Hindu Samaj Party chief Kamlesh Tiwari, has said that she was not satisfied with the investigations into her husband’s murder and demanded an NIA inquiry.

“I am not satisfied with the investigations and I demand an inquiry by the  (NIA). I will keep Rs 15 lakh ex-gratia given by the government till a BJP leader is killed in similar fashion and will then pool in an equal amount and give Rs 30 lakh to the bereaved family,” she told on Sunday.

“I am highly dissatisfied with the probe. Why is the case not handed over to the NIA? The Uttar Pradesh Police and ATS will not be able to work it out. My husband had spoken to Naka Hindola SHO about the threat to his life a day before he was murdered but he paid no heed.”

Comparing the compensation given to her with that given to the victim of the Dadri lynching case, Kiran said: “The Dadri victim as given Rs 50 lakhs and we were given Rs 15 lakhs. Is this a difference in the cost of lives?”

She accused the Uttar Pradesh government of trying to “silence” her with money. “But I will not keep quiet and continue to raise my voice. I will fulfil the dreams of my husband,” Kiran said, adding that the Hindu Samaj Party would now work towards making a Hindu Rashtra and also contest elections.

She said that the state government had also ignored the family’s demand for naming Khurshid Bagh and Kamlesh Bagh and installing a statue of her slain husband.

Kiran said that she would not rest until the “real killers” of her husband were hanged.

“Give me my husband’s killers and I will hang them if the government cannot ensure a death sentence for them,” she said.

She also demanded a Z-plus security cover for the family and raised concerns about the security of lone eyewitness Saurashtrajeet Singh.

“His security is of utmost importance because he is the one who can recognize the killers,” she said.

Kamlesh Tiwari was shot dead inside his office on October 18 and the alleged accused, identified as Ashfaq Hussain, 34, and Moinuddin Khurshid Pathan, 27, were arrested by Gujarat Anti-Terrorism Squad (ATS) on October 22.

Five more persons have been arrested so far in connection with the case for either conspiracy in the murder or helping the accused.

“Things are not clear yet. The two main suspects actually surrendered and were not arrested as is being claimed,” he alleged.  (Agency)