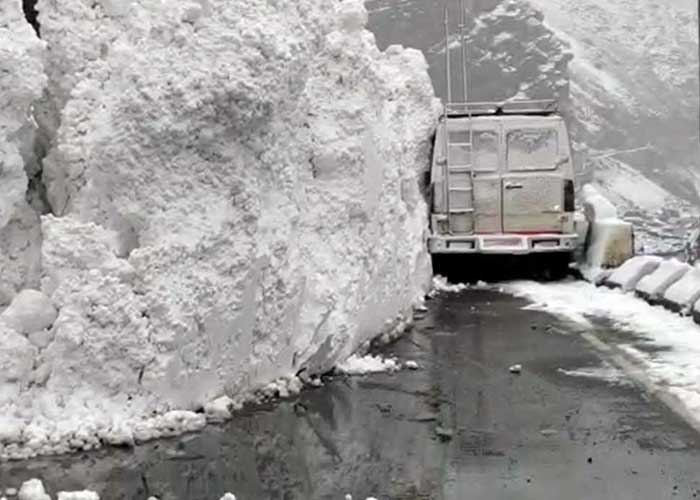 A video of a glacier wall breaking off and sliding on to the highway in Kinnaur, Himachal Pradesh is revolving around the Internet and it is the scariest thing you will come across today.

The video was shot at Tinku Nallah near Pooh, Himachal Pradesh and was shared on Twitter by Indian Revenue Services officer Naveed Trumboo.

The IRS officer shared the video and wrote, “Ever seen the force of a moving glacier in real-time? This is in Tinku nallah near Pooh on NH-5, Kinnaur, HP… #ClimateChange is not a distant reality.”

The clip begins by showing a huge chunk of glacier breaking apart and moving down a road.

Some were recording the scene on their phones, then the snow is seen sliding towards the cars while frantic tourists continue to scream “Go back!”.

People on the social media expressed their concern over the incident, climate change at large and attracted a lot of comments, with many disputing the claim that it was a glacier that broke apart.

A user corrected the IFS officer and wrote: “This is not a glacier… this is part of an avalanche that is slipping on the road because even road has an ice layer over it & as a result there is poor friction.”

A post read, “This is not a glacier – a small avalanche. Happens all the time in snowy mountains. Not #ClimateChange.”

“We are raping nature, it won’t spare us,” added another.

Tweeple remarked, “People need to be educated about calamities and safety measures so that they can pass it on to kids as well. It’s no brainer to screw yourself for the unseen which most of the tourists in India aren’t prepared to handle. Excitement could be deceptive.”

A post read, “Climate change is not a DISTANT but a Reality. Its happening all the time. Its neither new nor will it stop changing with lesser use of Co2. Climate is dynamic. It keeps changing.”  (Agency)

Ever seen the force of a moving glacier in real-time? This is in Tinku nallah near Pooh on NH-5, Kinnaur, HP.. #ClimateChange is not a distant reality. pic.twitter.com/J7ifxaAh1g