Home Punjab Courts to be set up in 7 High Security Prisons to ensure... 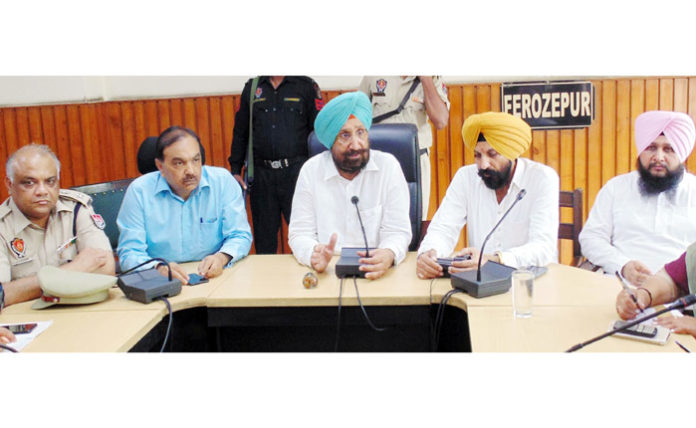 The Court rooms are being set up in the seven high security jails of Punjab, where shortly the court proceedings will start. This step has been taken to prevent dangerous criminals from taking them to the court. Such prisoners will be presented in courts set up in the jails which will function once a week.

These views were expressed by Mr. Sukhjinder Singh Randhawa, Minister for Jails and Cooperation in a media interaction on Wedensday at Ferozepur DC complex.

Mr. Randhawa said that the court rooms are being set up in Patiala, Kapurthala, Amritsar, Bathinda, Faridkot, Sangrur and Nabha high security jails, for which the notification has already been issued.

He said that to ensure maximum security in the jails, tear gas shells, rubber bullets and SLR were purchased by spending Rs. 5 crores to strengthen the security system inside the jails.

He said that after the formation of the Captain Government in Punjab, many steps have been taken for security of the jails, adding that he said that there was a shortage of 1500 employees in the jails and 750 have been recruited.

The approval for recruitment of 450 employees, out of remaining 750 has been received by the government and the recruitment will start soon, the minister added.

Apart from this, three divisions of the paramilitary forces will soon be deployed for the protection of the prisoners and three more units will be posted in due course of time.

Mr. Randhawa said that CCTV cameras and drone cameras will also be used for the 24×7 hrs surveillance in the jails, which will be monitored on daily basis. Similarly, the portable jammer systems will be installed in prisons, which will completely restrict mobile signals inside the jail, he said.

In order to set up PCOs outside each barrack in the jails, a contract with BSNL is under process and the each prisoner/under trial prisoner, will be able to speak on any two numbers for 8 minutes in a day.

Speaking on the issue of drug addiction, Cabinet Minister Sukhjinder Singh Randhawa said that the Punjab government has taken several major steps to crack the drug supplies by arresting the drug smugglers in large numbers and locking them in jails.

Apart from this, an awareness campaign in the state is also going on separately. He however, solicited the cooperation of the Central Government to break the drug supply chains.