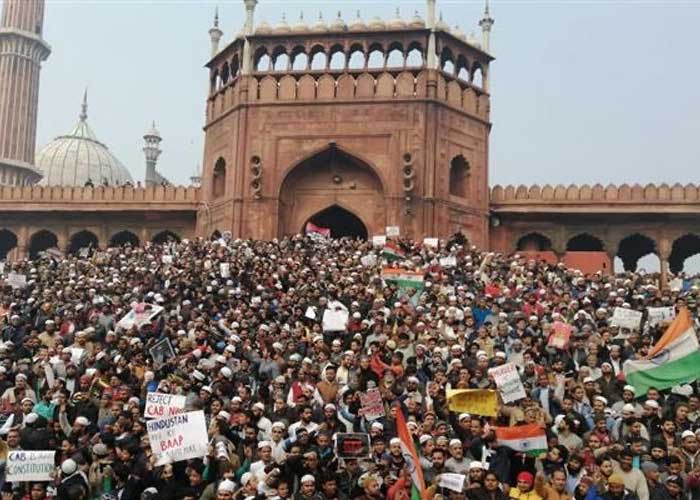 The film fraternity continues to be divided over the Citizenship Amendment Act (CAA), which has resulted in massive nationwide protests.

While several celebrities have spoken out against the controversial CAA and defended the countrywide students’ protests, others have shown support in favour of the government’s decision to impose the Act.

“My appeal to all wonderful students of India – Protest is your right. But Protecting India is your duty,” Kher tweeted, along with a video message.

“Seeing the situation of the country for the last few days, something strange is happening in the mind. The mind is very disturbed by seeing the scenes which are being seen through social media and television. I will not comment on the students’ movements, but will also say that this is their right in Independent India.

“But when such elements who want to harm the country, start participating in the student movements and harm the country for their selfishness, then all these can prove to be harmful for the country,” Kher said in the video.

The veteran actor, whose wife Kirron Kher was elected to Lok Sabha as a Bharatiya Janata Party (BJP) MP from Chandigarh in 2014, urged people to first get a clear understanding of the Act before reacting.

Actor Paresh Rawal, who was elected to Lok Sabha as a BJP MP from Ahmedabad (East) in 2014, has also been tweeting in favour of CAA.

“Sardar Patel had unified India and @narendramodi will never let it disintegrate.” Rawal had tweeted.

Filmmaker Vivek Agnihotri and producer Ashoke Pandit, known to be open supporters of the BJP government, have also favoured CAA.

However, other celebrities including Farhan Akhtar, Manoj Bajpayee, Anurag Kashyap, Huma Qureshi, Richa Chadha, Ali Fazal Shabana Azmi, Kabir Khan, Swara Bhasker , Sushant Singh, and Siddharth have outright denounced the amended citizenship law. Many of these celebrities even attended protests and joined the students in raising voices against against CAA.

“To raise your voice against something is democratic right, people are raising their voices and I’m of view that there seems to be a certain amount of discrimination in what is happening”, Farhan said.

Parineeti Chopra described the police action against students as “Barbaric” and was dropped as Haryana’s brand ambassador of ‘Beto Bachao Beti Padhao’ campaign.

“If this is what’s gonna happen everytime a citizen expresses their view, forget #CAB, we should pass a bill and not call our country a democracy anymore! Beating up innocent human beings for speaking their mind? BARBARIC,” Parineeti had tweeted.

Sushant Singh, who recently joined an anti Citizenship Amendment Act rally at Kranti Maidan in Mumbai earlier this week, was dropped the next day as host of the popular crime show, “Savdhaan India”.

“I went to August Kranti Maidan to show solidarity with people who are afraid because of this new Act. There is a lot of confusion and there are a lot of questions in people’s mind regarding the Act, and that includes me. We are trying to raise our voice so that the government does something about it. It was a peaceful and wonderful protest. All of them were raising their voice for the country. I felt so proud of my fellow Mumbaikars, and Mumbai Police also handled the situation really well,” said Sushant.

“This has gone too far.. can’t stay silent any longer. This government is clearly fascist .. and it makes me angry to see voices that can actually make a difference stay quiet,” Kashyap had tweeted.

New generation stars Alia Bhatt, Sonakshi Sinha and Ishaan Khatter posted pictures of the Preamble of the Constitution. While Alia said we should “learn from the students”, Sonakshi reminded what India essentially was, is and will always be — a sovereign socialist secular democratic republic.

Hrithik Roshan had expressed sadness over the unrest at various universities all over India while Priyanka Chopra condemned the brutal police action on students.

“Education for every child is our dream. Education is what empowered them to think independently. We have raised them to have a voice. In a thriving democracy, to raise one’s voice peacefully and be met with violence is wrong. Every voice counts. And each voice will work towards changing India. #HaveVoiceWillRaise #HaveVoiceMustRaise,” she had tweeted.

Hrithik wrote: “As a parent and a citizen of india , I am deeply saddened by the unrest across various educational institutions of our country. I hope and pray for peace to return as soon as possible. Great teachers learn from their students. I salute the worlds youngest democracy.”

Earlier, Kangana Ranaut had reportedly called a section of the film fraternity “cowards” for not speaking up on the current issue.

Many like Vicky Kaushal and Ayushmann Khurrana stuck to carefully crafted tweets that spoke of the need for peace and denouncing violence.

Amidst the ongoing unrest, Bigwigs such as Shah Rukh Khan, Salman Khan and Aamir Khan have maintained silence on the matter so far.

Akshay Kumar liked a tweet mocking the attacks on Kamia sttudents and then quickly disowned his view saying he had liked it by accident. He was trolled for his action, with a netizen calling him “spineless” — a comment Anurag Kashyap endorsed on Twitter.

Actors like Taapsee Pannu and Varun Dhawan refrained from expressing their views saying they did not have adequate knowledge on the subject.

Varun recently said: “We are sitting here in Mumbai, right now something else is happening in other parts of the country. It’s wrong of us to comment about what’s happening over there until we don’t see that, until we are 100 per cent aware what’s happening.”

Taapsee said: “I haven’t expressed my views on CAA because I haven’t studied about it. But the visuals which I saw in Jamia, I didn’t feel those were pleasant. I felt really sad when I saw the videos where students were talking about their plight. I feel something big has happened or something big is going to happen.”

Richa Chadha and Pulkit Samrat were seen engaging in a Twitter war with Ashoke Pandit over CAA.  (Agency)