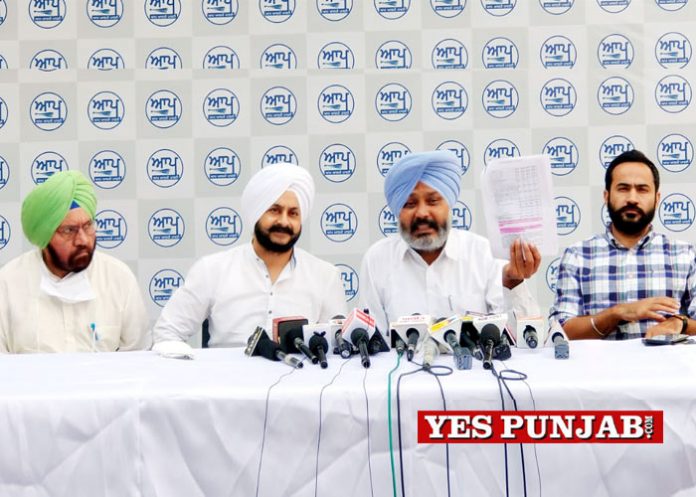 The Aam Aadmi Party (AAP) Punjab has termed the Modi government’s move to withhold Punjab Rural Development Fund (RDF) as another brazen attempt of the Centre to interfere in Punjab’s internal affairs by fraudulent implementing the black farm laws.

Addressing a press conference here on Thursday, Harpal Singh Cheema made public to the media a letter sent by the Union Ministry of Consumer Affairs, Food and Public Distribution to state Government on October 20, 2020 ordering blocking of the RDF. Others present on the occasion were Youth Wing Punjab President and MLA Meet Hayer, In charge, Punjab Affairs and MLA Jarnail Singh and State General Secretary Harchand Singh Barsat.

Cheema said, “The challenging situation in which the Modi government has withheld a whopping Rs 1,000 crore RDF, which reflects Prime Minister Narendra Modi’s revengeful attitude towards Punjab, besides meddling in its internal affairs. The move is an assault on the federal structure of the country, an attempt to implement the black laws on agriculture, which the Aam Aadmi Party vehemently opposes.

The LoP said that the alleged misappropriation of Rural Development Fund (RDF) by the Captain government like the Badals actually had emboldened the Modi government to withhold the RDF.

Elaborating further, Harpal Singh Cheema said that the central government had no right to demand an account of the RDF expenditure since it was a central grant and people of the state had the right to corner the state government.

Harpal Singh Cheema lashed out at the Amarinder Singh government saying that like the Badals, it had allegedly embezzled the RDF funds. The funds, which was supposed to be spent on the welfare of farmers, laborers and maintenance and beautification of villages, link roads and mandis, was misused by the state government, which the Center used as a weapon against Punjab.

Harpal Singh Cheema demanded that the Chief Minister Amarinder Singh should immediately issue a white paper not only on the RDF used during his own tenure but also the previous Badal government’s tenure.